About the Artist ​
In the 15 years he has been living on the Southern Mendocino County Coast, Scott has developed an intimate photographic relationship with its unique landscape.  His images capture the subtle beauty of the coast and forests with a highly unique, “painterly” style that emphasizes the quiet solitude of these landscapes.  Scott's main photographic goal is to be able to communicate this unique viewpoint to others, such that they are able to look upon his images, and develop a new and stronger appreciation for life's details.  He believes that a fine art photographic image is most powerful if it can be viewed with increasing pleasure repeatedly for many years, rather than simply have a strong initial impact.

“When I go into the field, I rarely carry any strongly preconceived ideas about subject matter for my images. I study the light, as it falls on the landscape, and look for ways in which it may bring out the hidden beauty around me. When things are going well, I literally enter a meditative state of mind, which allows me to create images that communicate the subtle emotions aroused by the scene surrounding me.”

While the vast majority of his artistry takes place looking through the camera's viewfinder, Scott's technical mastery in the “digital darkroom” allows him to optimize each image digitally so that the finished print matches his original artistic vision.

For the past several years, Scott has shown his fine art photography prints at galleries and exhibits along the west coast.  His work is represented in private collections throughout the United States and beyond.  His images taken within the Point Arena-Stornetta Public Lands were used in the public relations effort to eventually have that area added as the first mainland-based unit of the California Coastal National Monument in 2014.  Additionally, Scott works as the Operations Manager at the Gualala Arts Center.  You can view Scott's work on his website, www.schieffophotography.com.  His work can also be found at the Gualala Arts Center, the Artist's Collective in Elk, and in various regional venues.
​Scott Chieffo's images at the "Thought behind the Shot"
​Note: if you are interested in purchasing any of Scott's photography from "The Thought behind the Shot", please contact Gualala Arts at (707) 884-1138 or email info@gualalaarts.org for further information or ordering detail.

Clearing Storm  $250  #SC05
This recent image was captured on Manchester Beach, immediately after a short burst of heavy rain.  I had gone out, knowing that the unsettled weather could result in unique light, but that if the rain came, there would be nowhere to take shelter.  So when the skies opened up, I just covered up as best I could, stood there and took it!  I saw a sliver of clear sky on the horizon and knew that the pleasure may be worth all the pain!  As the sun broke through, I had just enough time to set up my tripod at the water’s edge and take a few shots.  This image is an “exposure-blend” of two frames… one exposed for the highlights and one for the shadows. 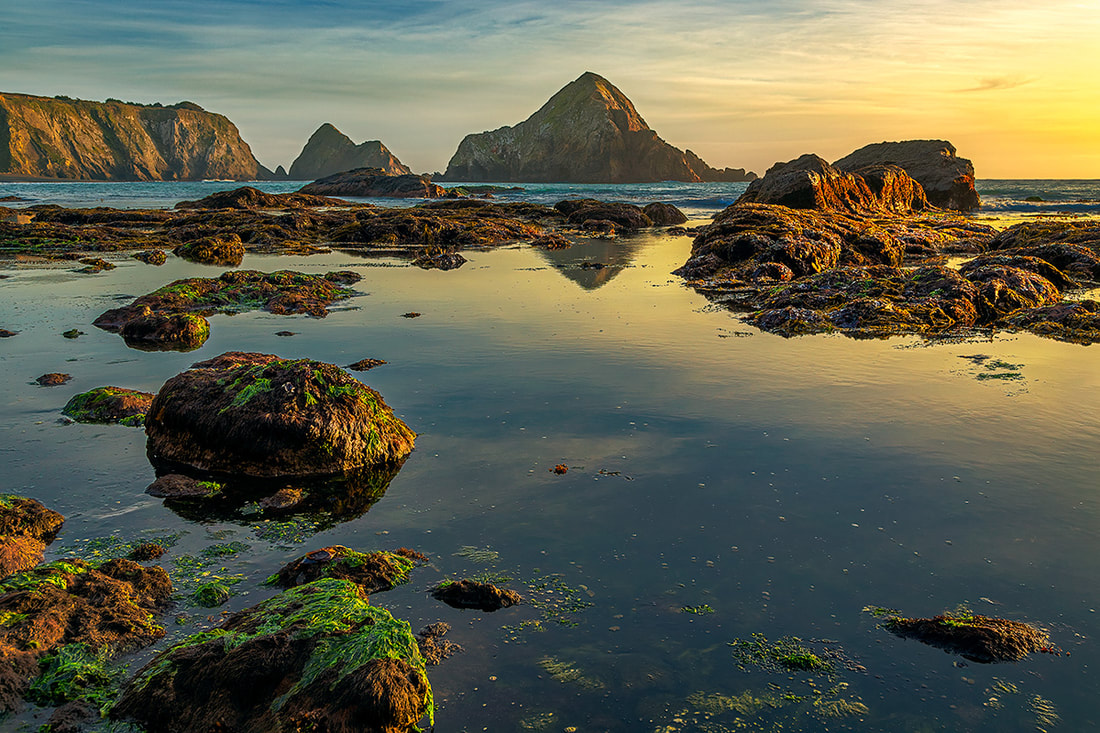 Greenwood Beach View No. 3  $250  #SC08
This is a composition that I captured several years ago on Greenwood Beach in the town of Elk and have always really liked.  I shot multiple frames at different exposures, but never did anything with them, because the difference between highlights and shadows was way too wide to be able to use only one of the frames.  I’ve recently learned a better way to seamlessly and naturally blend multiple exposures, and bring a shot like this back into sync with the levels of brightness that the human eye is able to see.  This is an "exposure blend" of two frames from the same composition… one optimized for the highlights and the other for the shadows. 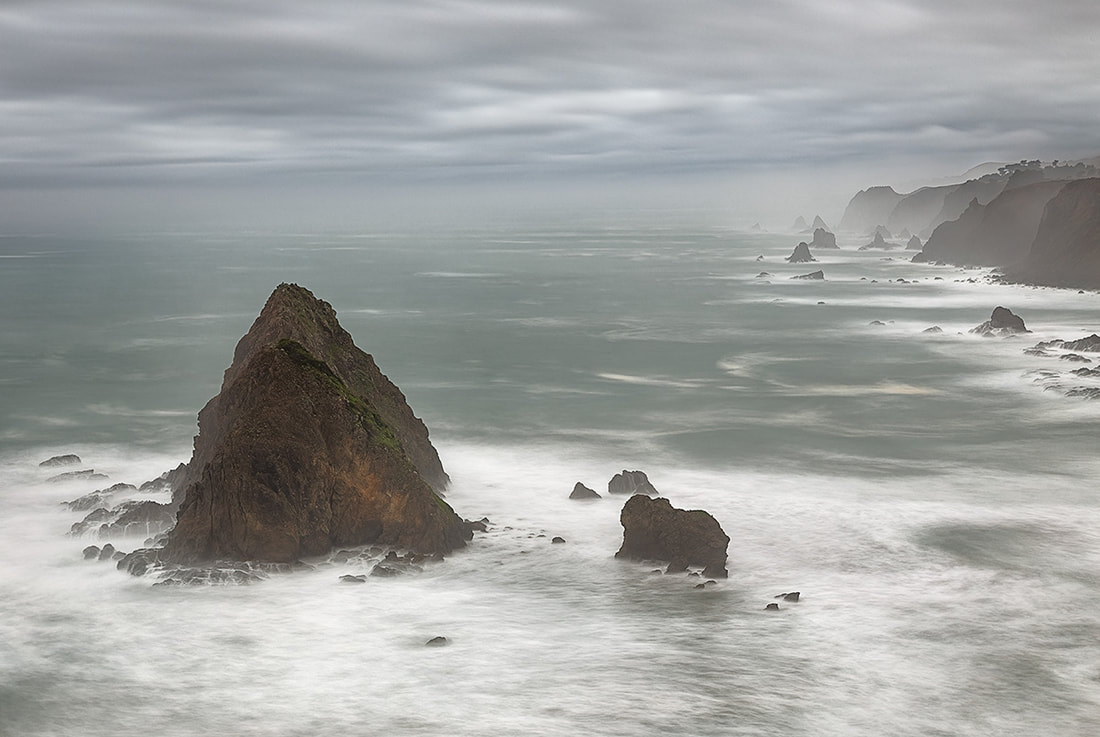 Heading North  $250  #SC07
From the first time I drove north of the town of Elk several years ago, this particular view has always inspired me as much as any on the Mendocino County coast.  I have tried to capture it on several occasions in several different moods, but I’ve never been satisfied with the result.  With that in mind, this past winter, I made a point of heading out extra early one morning on my way up to Ft. Bragg.  The high storm clouds above, mixed with the early morning low fog drifting among the sea stacks, give this image a moodiness that seems to work well.  A 45-second exposure time blurs the water enough to complement the overall feeling. 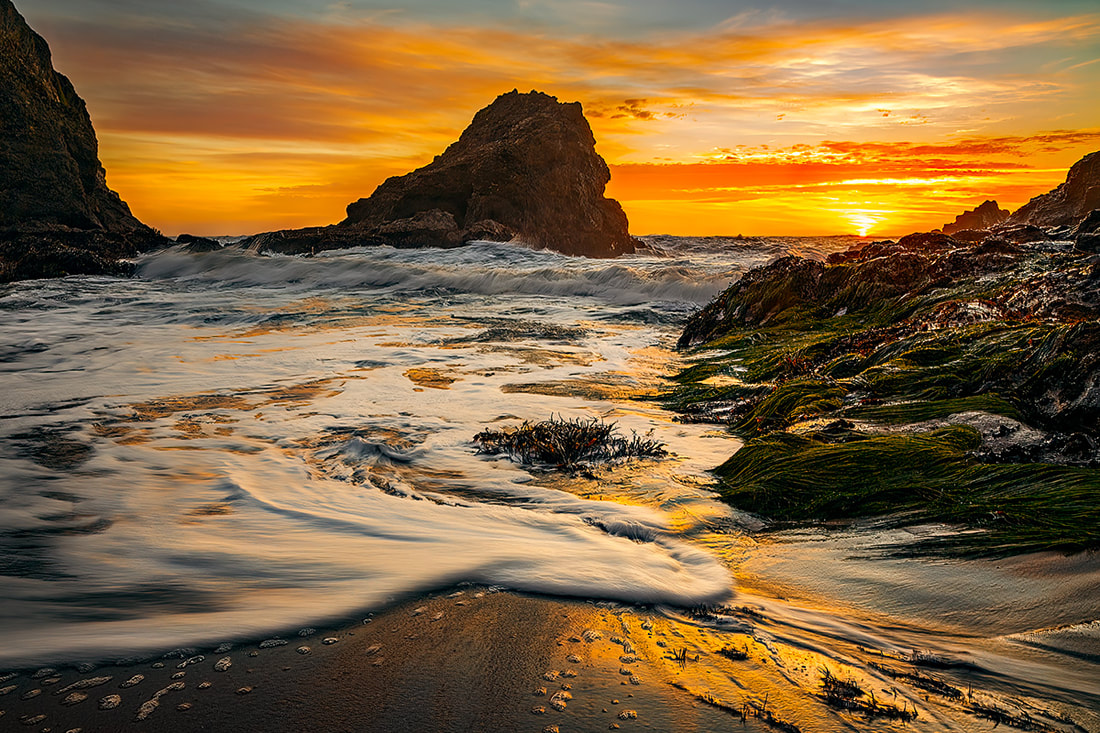 Incoming!  $375  #SC06
I hadn’t originally planned to photograph on this recent winter day, but skies were looking too promising to pass up.  So just before sunset, I made the short drive to Hearn Gulch, and hurried down to the beach, where I was immediately drawn to the incoming waves wrapping around the near rocks, with the sun about to set in a perfect spot above it all.  I set up the camera near ground level and proceeded to shoot away as the sun set and the waves rushed over the base of my tripod.  Based on this experience, the next day I immediately went online and purchased a pair of waterproof neoprene socks… turns out that water’s pretty damn cold! 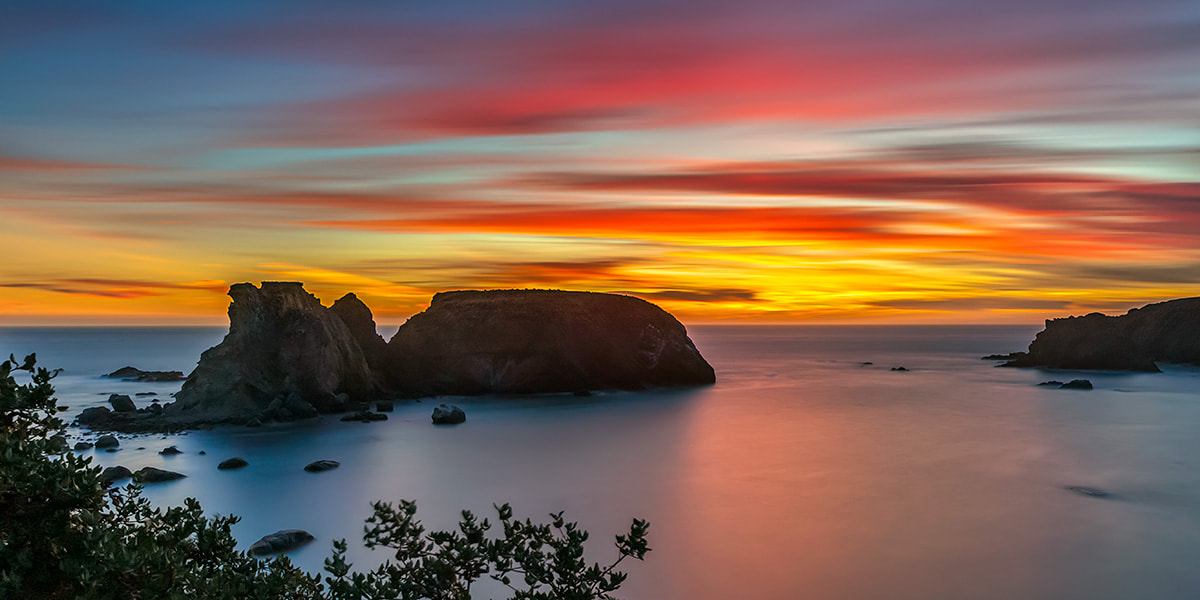 Iversen Cove Sunset  $325  #SC04
This shot was taken as the post-sunset twilight had almost completely faded and darkness was taking over the landscape. It was almost too dark to see what I was doing!  It’s an exposure of more than two minutes, which resulted in silky-smooth water and highly saturated colors.  In my mind, the blurred effect on the colorful clouds, caused by the long exposure was the most important factor in the success of this image.  With the last light fading so quickly, I typically only get one chance to make an image like this work, so luck was with me on this evening. 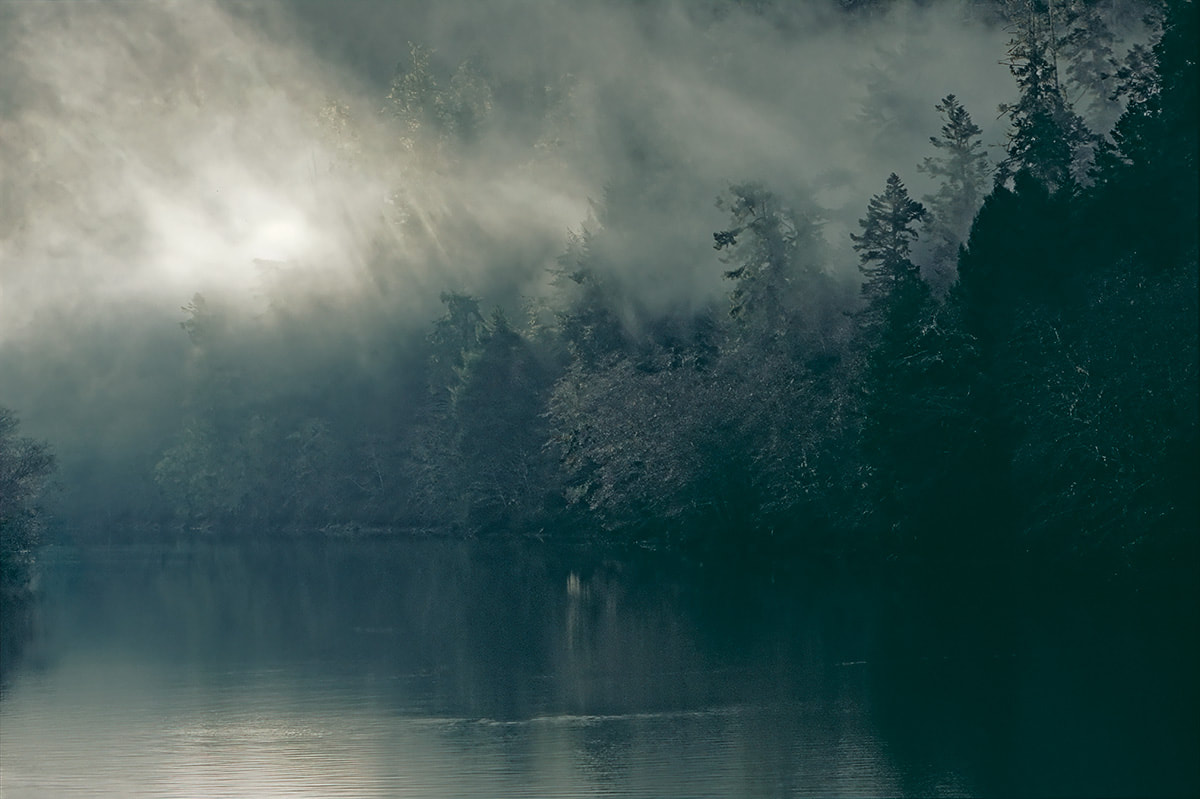 Low Clouds and Light Rays Over River  $375  #SC03
This morning view of a clearing storm was taken looking out over the Navarro River, from the intersection of Hwy 1 and Hwy 128.  It’s actually an older image, originally shot on slide film and has always been one of my favorites since I captured it more than 15 years ago.  What makes this piece unique is that it’s printed on a metal sheet with a clear-coated surface, rather than the standard white surface.  The brushed aluminum shows through where it would normally be white, creating an almost holographic appearance.  Though this doesn’t seem to work for most landscape images, the effect works perfectly for this high-contrast, moody composition. 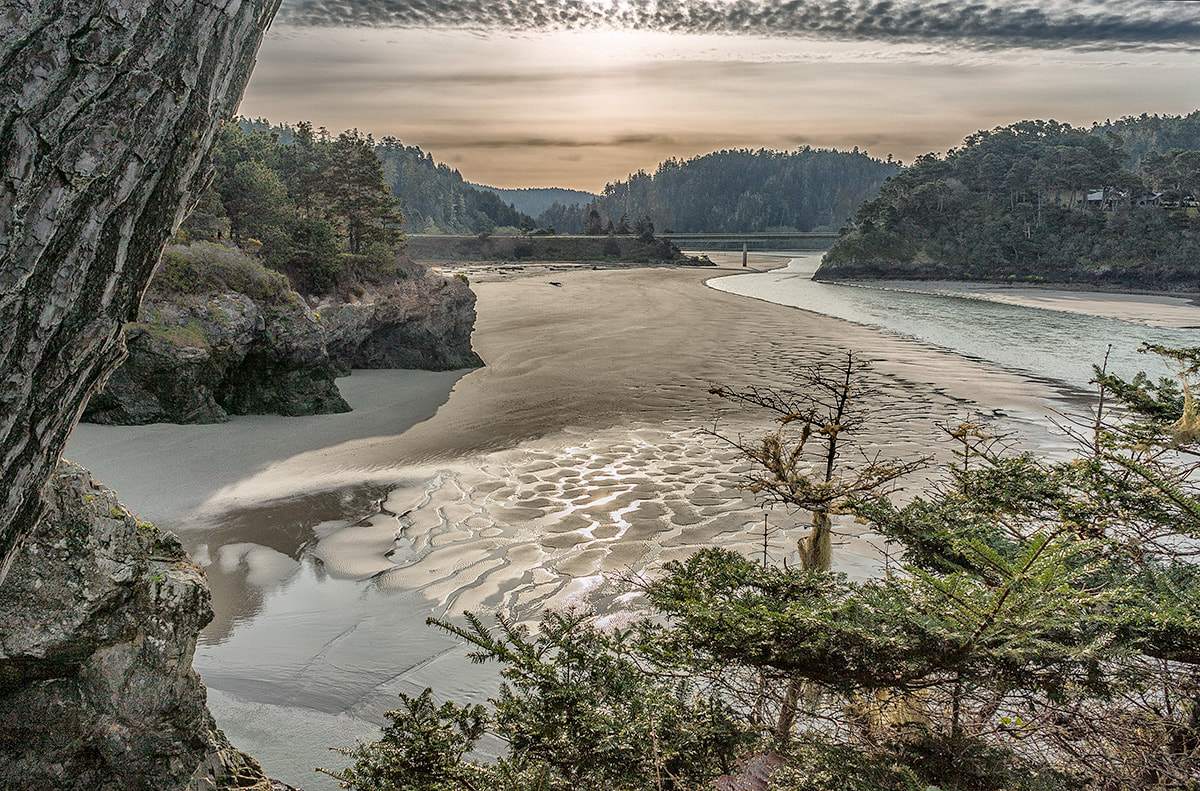 Luminous Morning  $375  #SC03
This is one of my all-time favorite compositions, looking east over the mouth of Big River from the Mendocino Headlands, just after sunrise.  Everything just seemed to come together.  The shimmering patterns in the sand, caused by the extremely low tide, were the perfect compliment to the framing created by the land and sky elements.  The winding river flowing under the Hwy 1 bridge cut perfectly through it all, while the light cloud cover was just enough to soften the light for a single exposure. 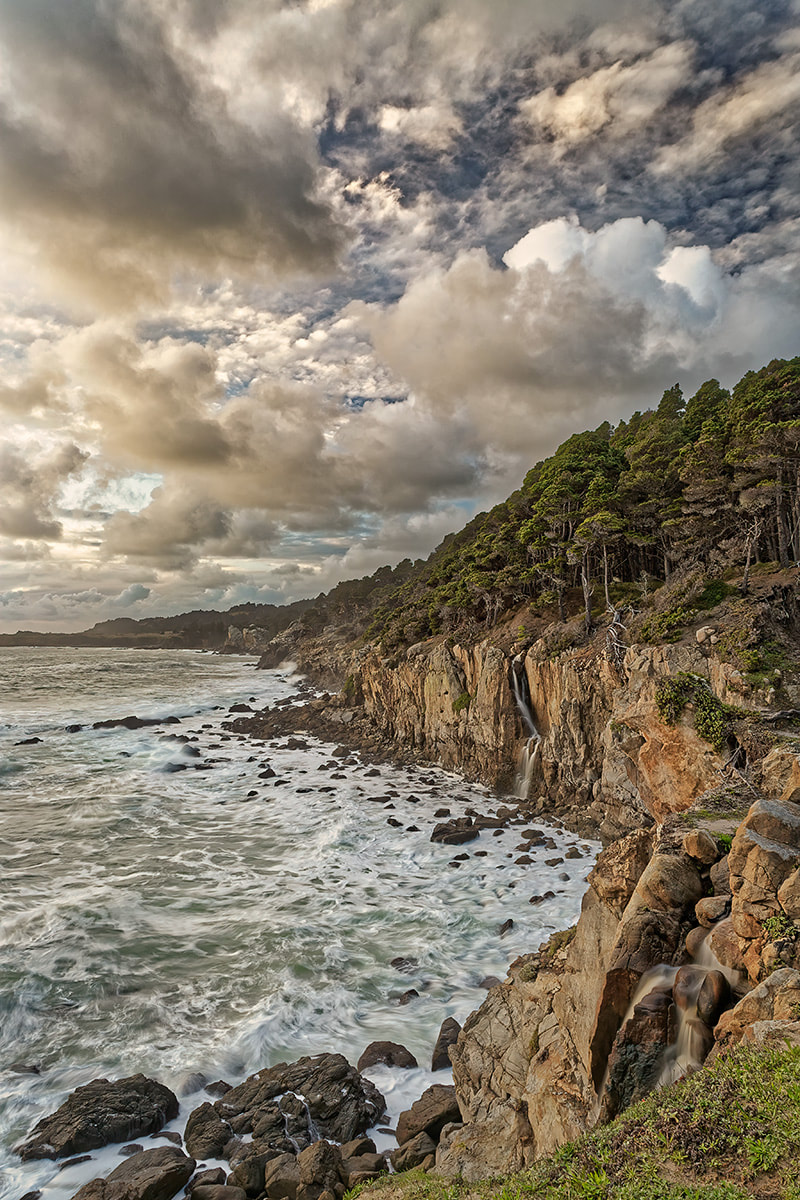 ear and Far  $875  #SC01
I visited this spot in Salt Point State Park for four or five straight days over the course of a particularly stormy late-winter week, knowing that these falls rarely flow at this level.  This shot was taken shortly after I watched my neutral density filter tumble over the cliff and into the ocean below.  My original intent was to use that filter to capture the scene with a very long exposure, making the water appear silky-smooth.  Without the filter, I had to significantly shorten the exposure time, which ended up resulting in a much more energetic image… a lucky, though expensive break! 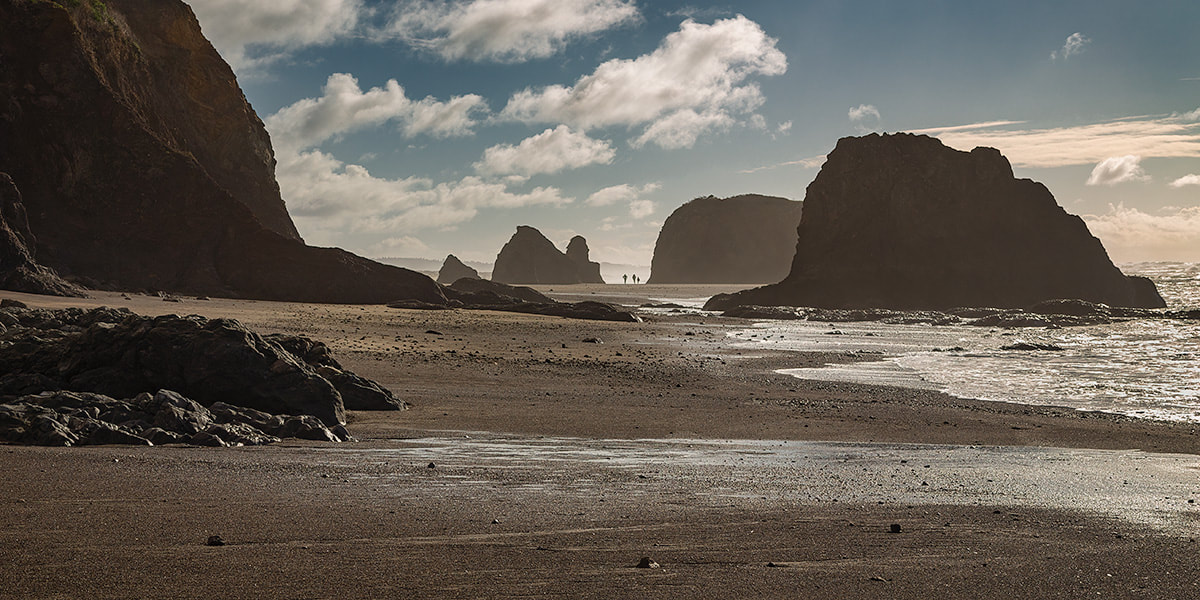 Social Distancing  $195  #SC09
I recently spent a day exploring the coast north of Ft. Bragg for the first time and was instantly taken when I first stepped onto this particular beach (Seaside Beach).  The numerous sea stacks rising straight out of the sand are quite a dramatic sight, particularly at low tide.  This image was taken on that blustery winter afternoon, at a time when there weren’t many people on this easily accessible beach.  It’s really just a quick “grab” shot that I captured while documenting the beach to plan for future possibilities.  At the time, I really didn’t realize the importance that the family in the distance would have on the overall impact of this composition. 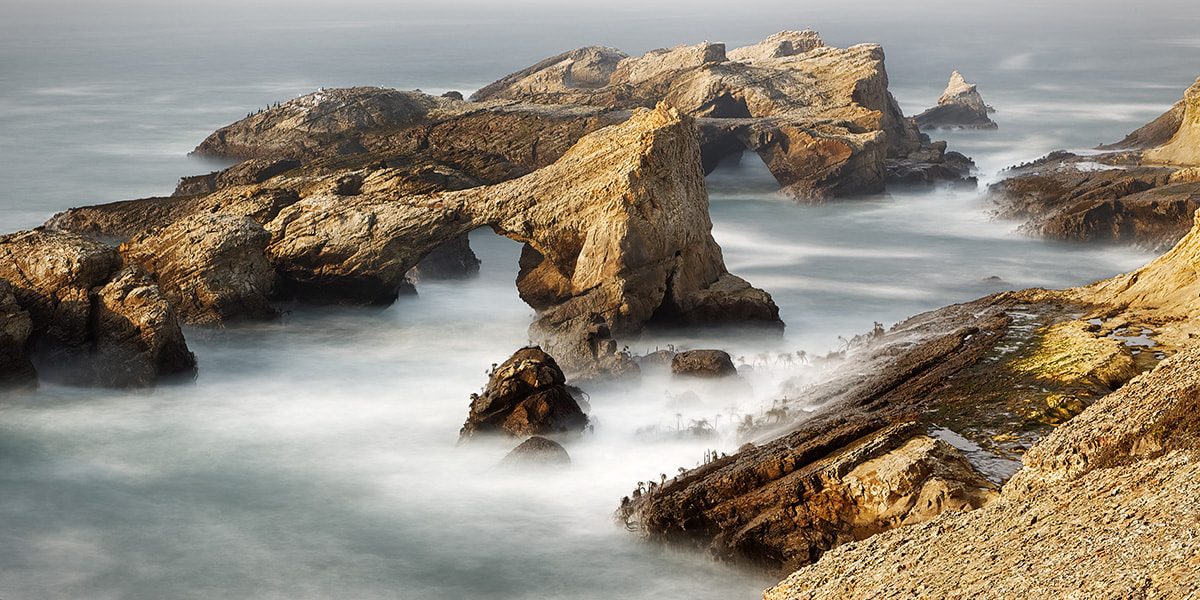 Stornetta Lands Series No. 2  $195  #SC10
This is the most recent of many images I’ve captured in and around one of my favorite coastal spots on earth.  This small stretch of wind-swept sea stacks and arches on the outer reaches of the Stornetta Public Lands seems to offer me unlimited photo possibilities. For this image, a panoramic orientation compliments the angular leaning of the rock formations, while a 30-second exposure is enough to blur the churning ocean and almost make it appear that the rocks are rising above the clouds.  The shot seems to capture the otherworldly feeling I associate with this spot as well as any that I’ve taken.
Back to "The Thought behind the Shot" home page