Paul Kozal, a Sea Ranch resident, has been contributing to the world of fine-art photography for over thirty years. His work has been featured in leading photographic publications and art magazines. Kozal's photographs are in the collections of the Monterey Museum of Art, the Tokyo Cultural Center, the Cantor Center for the Arts at Stanford University and several corporate collections. His photographs are frequently selected for the Arts in Embassies Program. Kozal's work has been exhibited in numerous solo and group shows throughout the United States. He is represented in several fine art galleries including his personal gallery, Studio 391 in Gualala, California.

The majority of my images are inspired by the beauty of The Sea Ranch, a ten mile stretch of land of the Sonoma coast known for it's distinctive architecture and commanding views of the Pacific Ocean. My primary desire is to communicate the beauty of my surroundings - a ray of sunlight gleaming across the sea; sheep grazing in the meadows; wooden barns in the afternoon fog; giant redwoods and windswept cypress trees; bluff-top trails skirting the ocean - these are the indelible images I seek to capture through my camera lens.

Mr. Kozal’s work can be viewed in depth at www.paulkozal.com
Paul Kozal's images at the "Thought behind the Shot"
Note: if you are interested in purchasing any of Paul's photography from "The Thought behind the Shot", please contact Gualala Arts at (707) 884-1138 or email info@gualalaarts.org for further information or ordering detail. 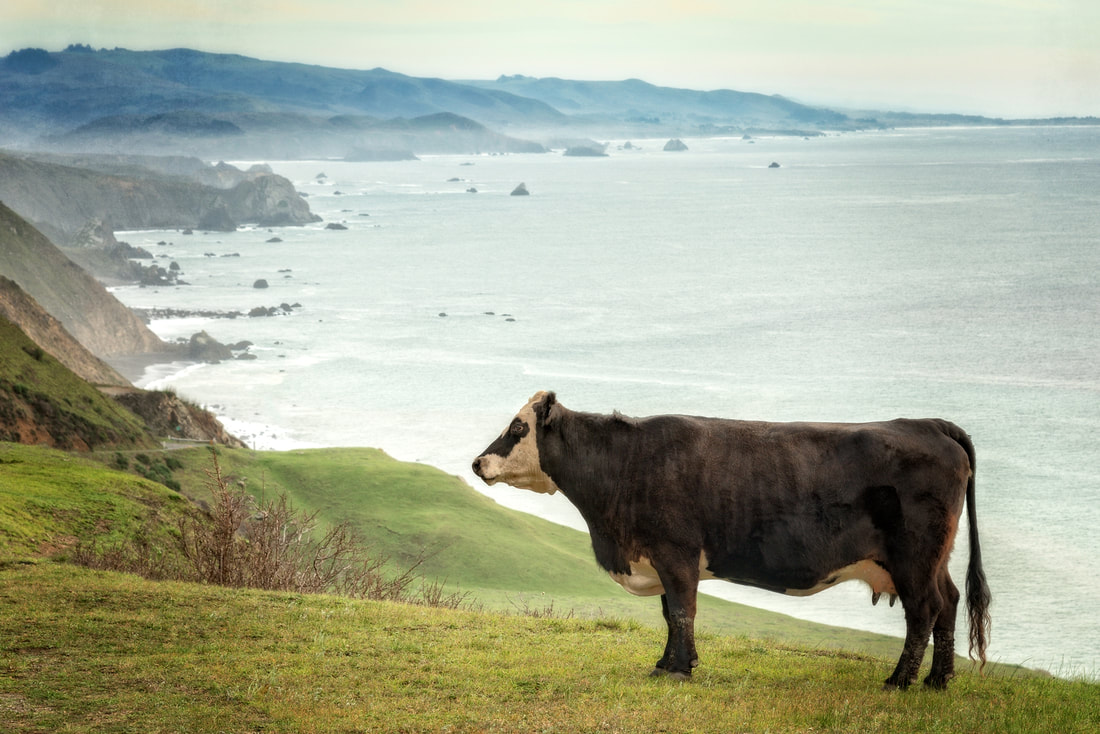 It is said that good things come to those who wait. This image was 10 years in the making. While traveling Highway One northbound and southbound over the years I always admired the grazing cows on the cliffside. Many a time the cows were present and I did not have my camera or there were other times I had my camera gear ready but no cows to be seen. In March of 2015 I happened to have my camera with me and a lone cow was standing perfectly still on the hillside against the backdrop of the Pacific Ocean. While trying to find a spot to pull over I hurriedly jumped the curb to park, ran uphill with my camera toward a vantage point to take photos. I only managed two photos before the cow moved out of the frame. In the blink of an eye or in this case, the swat of a cow’s tail, the moment ended, but I got the image.  As a traveler driving up and down the coast, you may wonder where the cows have gone. The local rancher moved the cattle to the east side of Highway One in 2016 where they continue to graze today. 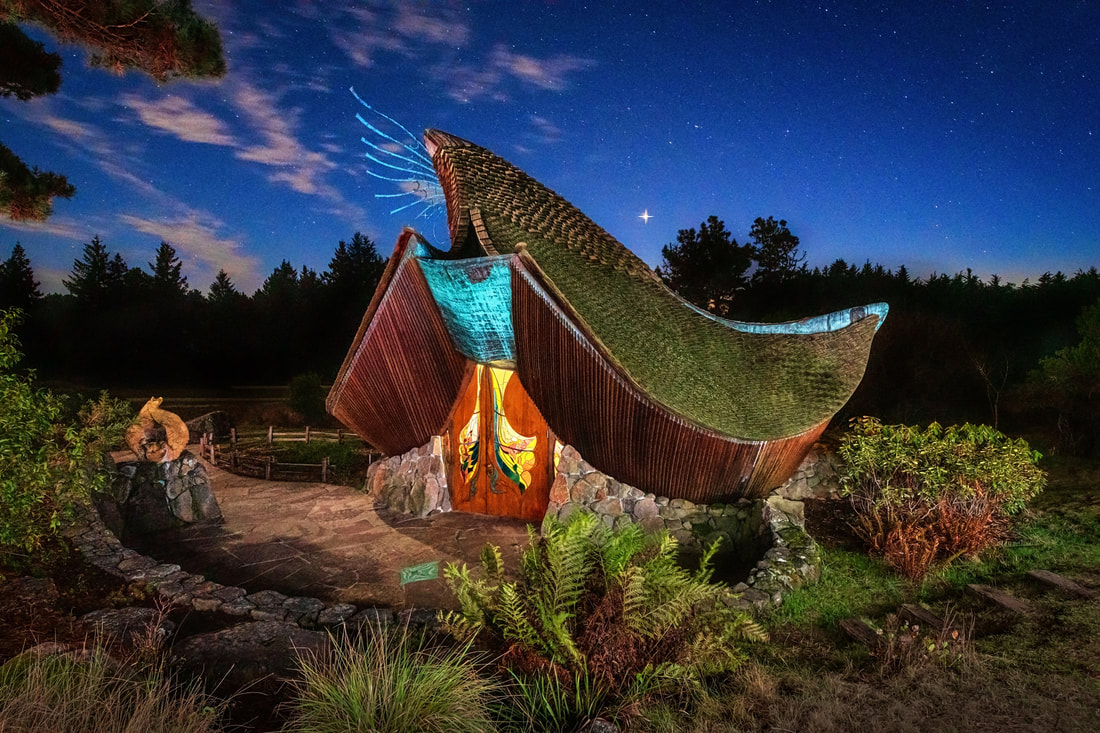 The Great Conjunction and Sea Ranch Chapel  $450  #PK19
​I was reading the news and pleased to discover an astronomical event was to occur. It was announced that The Great Conjunction would be visible for the first time in the night skies in over 800 years. The Great Conjunction, also know as the “Christmas Star” which was last visible in 1226, is where two planets, Jupiter and Saturn, align in the night sky. My thoughts naturally turned to making a photograph at the Sea Ranch Chapel. This event came to fruition for me on December 21, 2020. I arrived at the chapel at sunset to survey the grounds and remained through twilight to photograph so as to highlight the star when it would be the brightest in the sky. My friend, Bob Hathaway, a local photographer, assisted me with lighting the chapel with flashlights - known as “light painting” - during my 20-second exposure. I was beyond pleased to have captured the image I was seeking of this rare, celestial event. 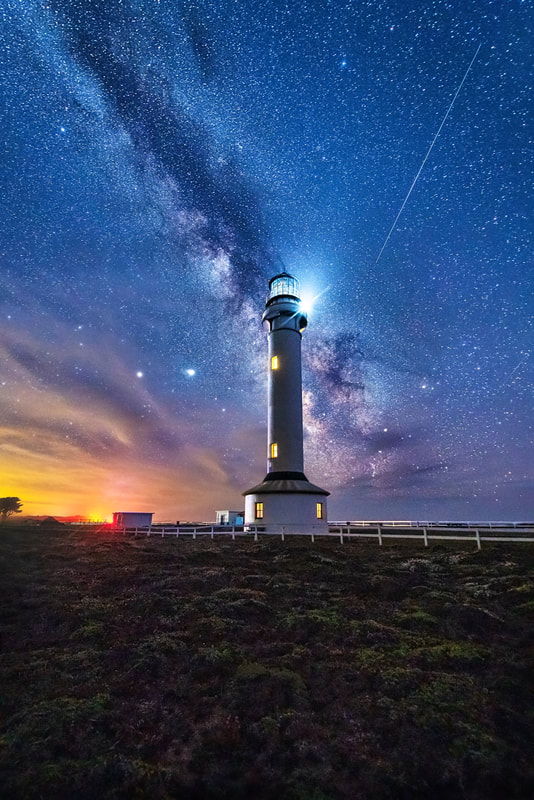 Point Arena Lighthouse, Milky Way and Perseid Meteor  $450  #PK01
For years, I wanted to photograph the Point Arena Lighthouse and the Milky Way together. Logistically, this was a challenge because the spotlights on the lighthouse would overexpose the photo. In addition, the property is closed to the public after dark. After an encounter with Mark Hancock, Executive Director of Point Arena Lighthouse Keepers, I got the opportunity to get his assistance in making the image. The month of August was an opportune time for the position of the Milky Way. It also happened to coincide with the Perseid meteor shower. My hope was to capture both of these moments at the same time. Mark turned off as many lights as he could in and around the lighthouse making the location as dark as possible. With walk-talkies in hand, I on the bluff and Mark inside the Lighthouse, he turned the interior lights on for 1-second to create a glow through the Lighthouse windows. During a 30-second exposure, a comet streaked through the sky creating an interesting juxtaposition with the lighthouse and the Milky Way. This was the image I had hoped for. 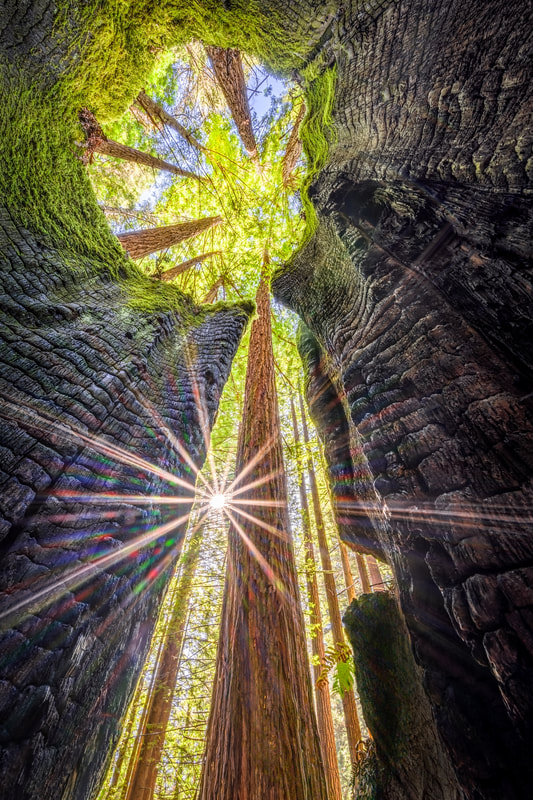 Redwood Rings – Hope Regained  $350  #PK04
While the Redwood Rings series was in progress, I occasionally posted some of these images to my Facebook page. When I uploaded this particular image to Facebook there were immediate responses and comments. One of the viewers happened to be a poet in England. He was so taken by the image that he felt compelled to compose a poem and shared the beautiful and moving work with me. I felt he captured in verse what I was trying to convey in a photograph. John Bernard Egan generously allowed me to share ‘Hope Regained’ for this exhibit.

John Bernard Egan 05/27/21
​Redwood Rings Study
A Series of 12 Images
I went for a hike in the Sea Ranch woods looking for solace while the stay-in-place mandate was in effect during the pandemic. I stopped and temporarily sought refuge – literally sheltering-in-place - inside a hollowed out redwood tree. Once inside, I became fascinated with the dark and burned interior of the rings inside the tree and the open canopy looking up to the fairy ring. I found the size, shape and variety of redwood trees amazing, each one displaying its unique characteristics like that of thumbprint just waiting for me to capture the beauty from the inside out. While my gallery was closed, it was during this time that the genesis for this series began. My main intention was to share the beauty of trees interior from the inside vs. how we view trees from their exterior. 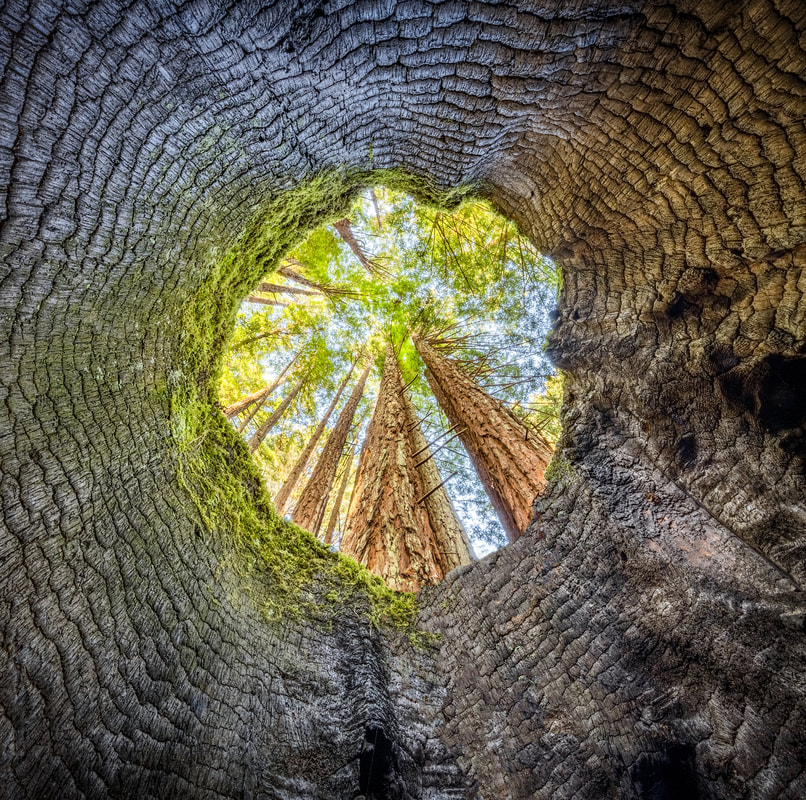 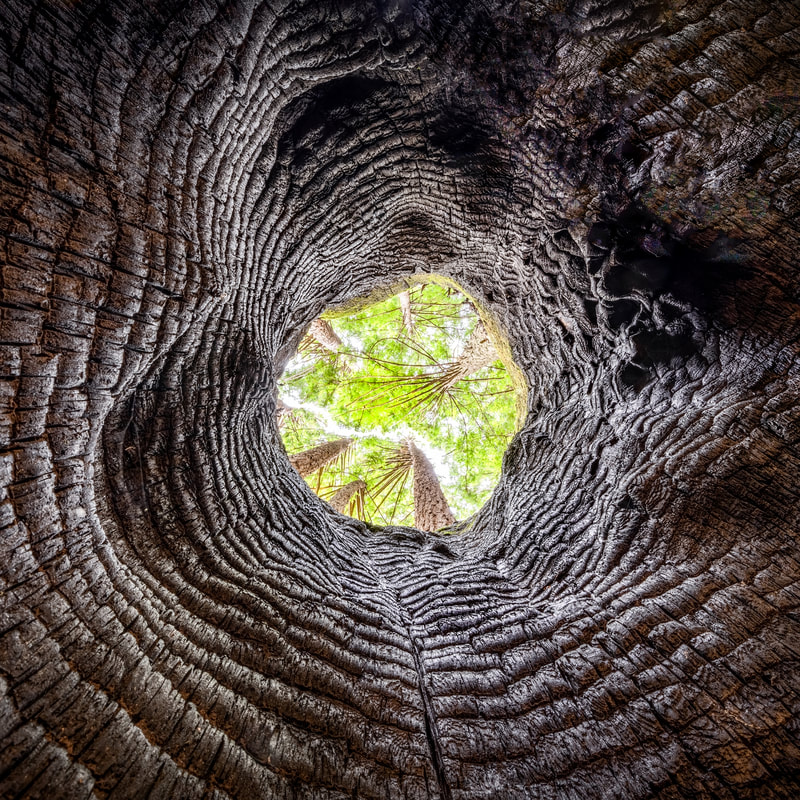 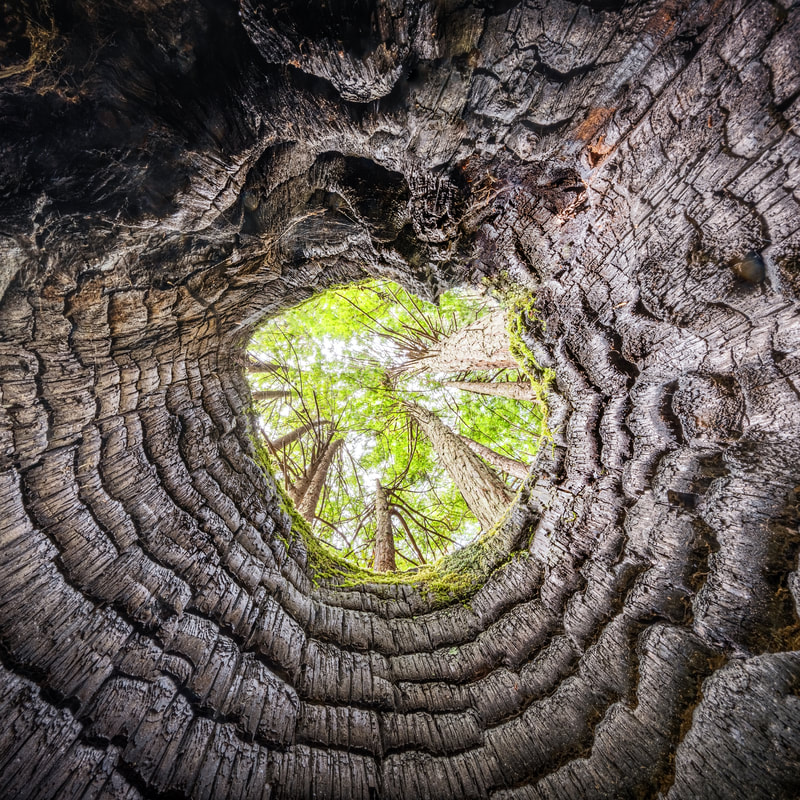 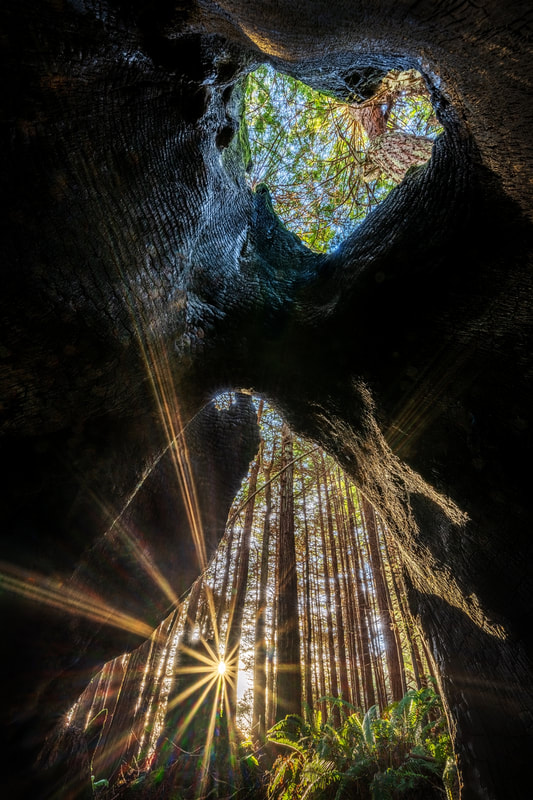 Redwood Stand – Study 6, Sea Ranch, CA   $350  #PK17
One might wonder how one enters the interior of a redwood tree. It is with this image that I incorporated how I accessed the interior. While looking up I captured the heart of the redwood that looks skyward. A sunset was crucial for timing to illuminate the stump’s base and its opening thus revealing the view from the inside out. 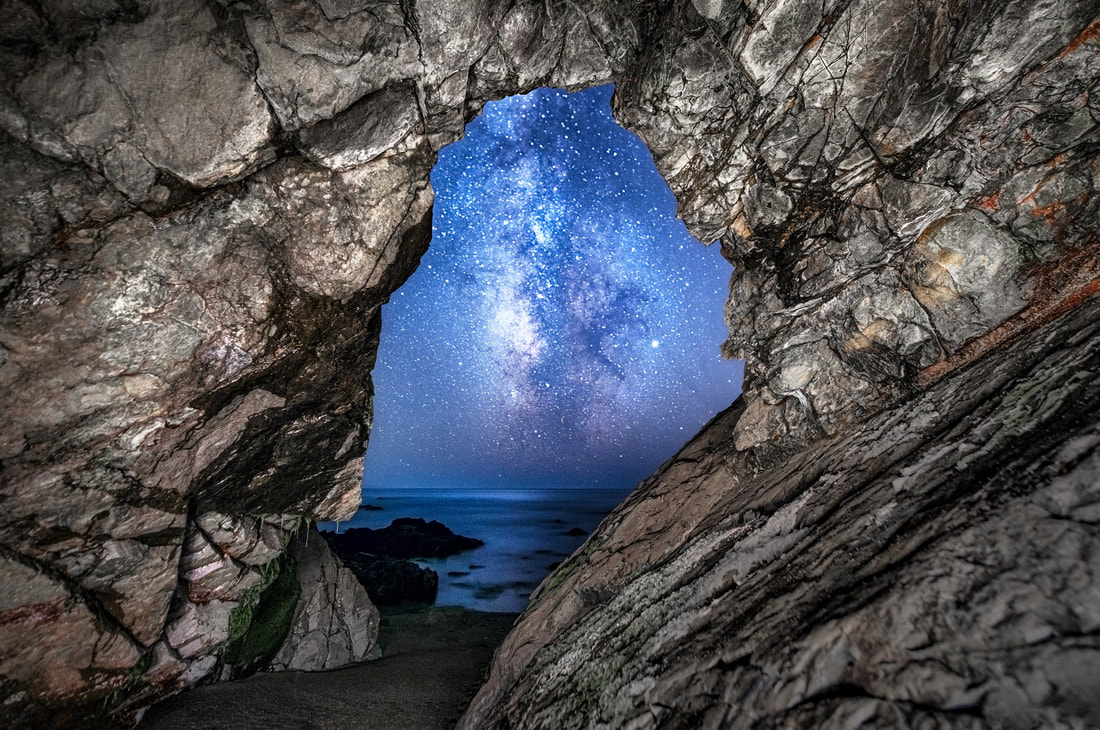 Sea Cave and Milky Way, Bluff Reach, Sea Ranch, CA  $379  #PK03
This image is part of an ongoing series of sea caves and the Milky Way in the Sea Ranch.
These images require advance research, planning and scouting to determine not only the alignment of the milky way at the cave opening, when it is a minus tide for cave access and when there is no moon so the stars become the brightest objects in the sky. My first attempt was not possible due to rain and fog. After attempting this again the following year all these things aligned for only three days in September. On day one, it was raining but on the second day the weather cleared and became optimal conditions. A light painting technique with a flashlight illuminated the cave walls to give balance to the night sky and cave interior thus allowing one to see every crack and crevice with a window to the cosmos. 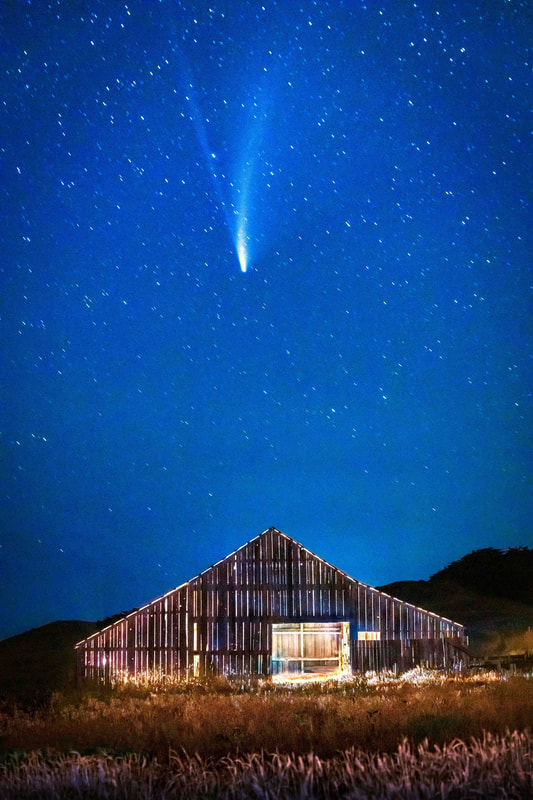 The Sea Ranch Barn and Comet NEOWISE – Study 3  $450  #PK20
The comet NEOWISE was visible to the naked eye after sunset for a few weeks in the month of July 2020. I am drawn to the night sky in general so thought the potential to capture the comet intriguing even though July can be foggy here on the coast. I realized the most strategic location to capture the comet would be the barn behind the Sea Ranch Lodge after several scouting missions. After several foiled attempts due to fog, the skies finally cleared and gave me one final opportunity on the last night it was to be visible. My friends, local photographers, Dave Allen and Bob Hathaway, assisted me with placing five flashlights inside the barn shining out to illuminate the interior for highlighting its architectural shape. At approximately 11:25 PM on July 23, 2020 to my delight the comet appeared over the apex of the barn thus allowing me to capture a moment in not only time but history. 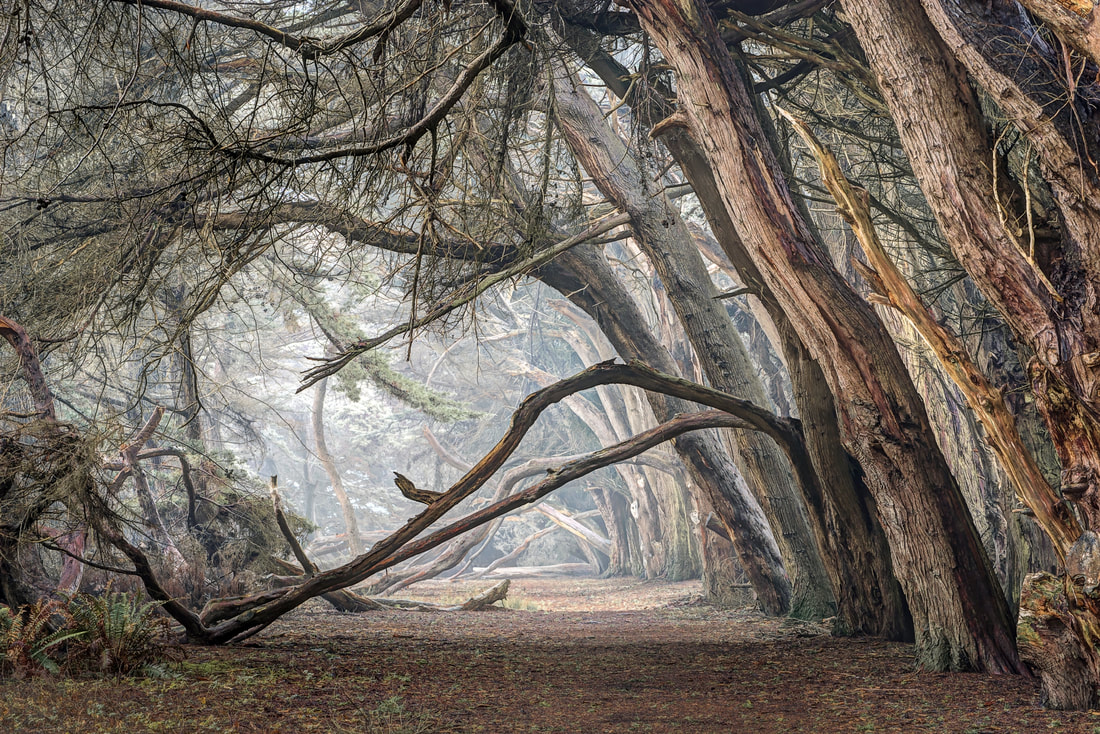 Winter Cypress, Sea Ranch, California  $450  #PK02
At any given time, I have a list of locations of where to go during various times of year for a variety of weather conditions to make my images. As a full-time coastal resident and photographer I’ve learned to embrace the changing weather conditions and make them work for my photographic intentions. The fog can be construed as an obstruction to a sunny day by many, but it has become my preferred backdrop for photographing in the Sea Ranch cypress tree hedgerows. One December evening after a heavy rain, fog was emitting from the ground. I immediately thought One Eyed Jacks cypress hedgerow would be the ideal location to capture the depth and contrast of the tunnel of arching branches. I intentionally used my telephoto lens with a compression technique where I stand back and zoom in. This creates a more ethereal mood and feeling in the tunnel of tree branches like the early California pictorialists that have always been a source of my inspiration.
Back to "The Thought behind the Shot" home page