About the Artist ​
Scott Sewell is an award-winning landscape photographer who specializes in Coastal California, the High Sierra and travel photography. He likes rocks, waves, clouds, contrast, texture and black and white images but has been known to shoot people, buildings and in color.

A fourth-generation Californian and a lover of the Western outdoors, Mr. Sewell has been roaming Highway 1 in Mendocino County and Highway 395 in the Eastern Sierra in search of images for most of the last decade. He has also spent many miles on the trails there, on foot and on horseback, because deep and intimate familiarity with the land he shoots is fundamental to his method. He does travel elsewhere but always returns to these two places as the anchor for his work.

A former IT professional, he is an adept user of the digital darkroom and prints, mats and frames all of his images himself. His frames are “old school” black Nielsen-Bainbridge Radials – slightly rounded – for a classic look. The glazing is UV-resistant acrylic for lightness and durability. The matting is conservation quality assembled with acid-free tapes. The fine art paper is Moab Juniper Baryta 305 semi-gloss and is printed with Canon Lucia pigment inks on twelve cartridge Canon 1000 Fine Art printer. This combination, with light and regular care, results in beautiful finished work that will last decades without fading or degrading.

His work is on display and for purchase at Point Arena Lighthouse, Coast Highway Artist's Collective in Point Arena, Matson Mercantile in Elk, at Hunewill Ranch and the Bridgeport General Store in Bridgeport and whenever he exhibits at Gualala Arts. His complete portfolio and online store is on the web at MostlyBlackNWhite.com.

Mr. Sewell splits his time between the Mendocino Coast, the Sierra Nevada and Marina del Rey in the Los Angeles area and is often accompanied by his wife, June, whenever he can pry her loose from her law career to travel.​
​Scott Sewell's images at the "Thought behind the Shot"
​Note: if you are interested in purchasing any of Scott's photography from "The Thought behind the Shot", please contact Gualala Arts at (707) 884-1138 or email info@gualalaarts.org for further information or ordering detail. 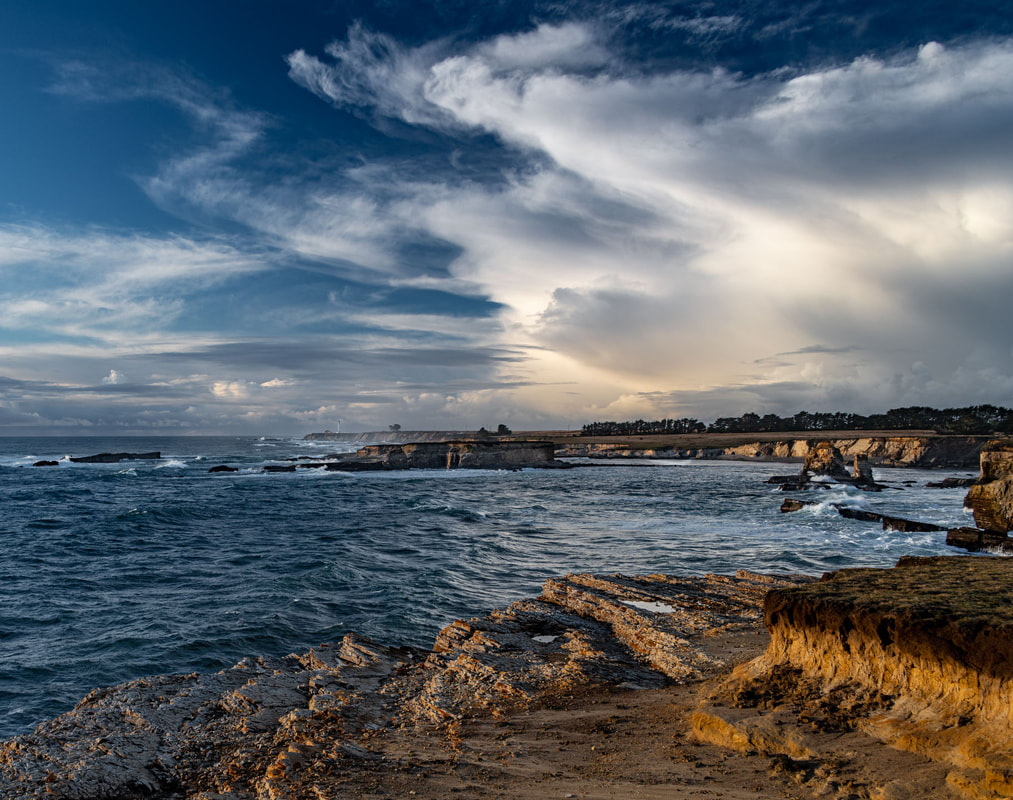 Aero Dynamic  $279  #SS09
The climatology of the Mendocino Coast makes it a rare day when storm clouds are visible to the north of Point Arena with a virtually unlimited horizon. This was a very dynamic storm where the light conditions changed literally second to second. It was sheer luck that I walked a mile down the coast to set up and got this panoramic shot just before sunset. Before I shot the next frame, a cloud passed between the Lighthouse and the sun, the light dimmed and then was gone. Although I stayed for another 45 minutes, it never returned. 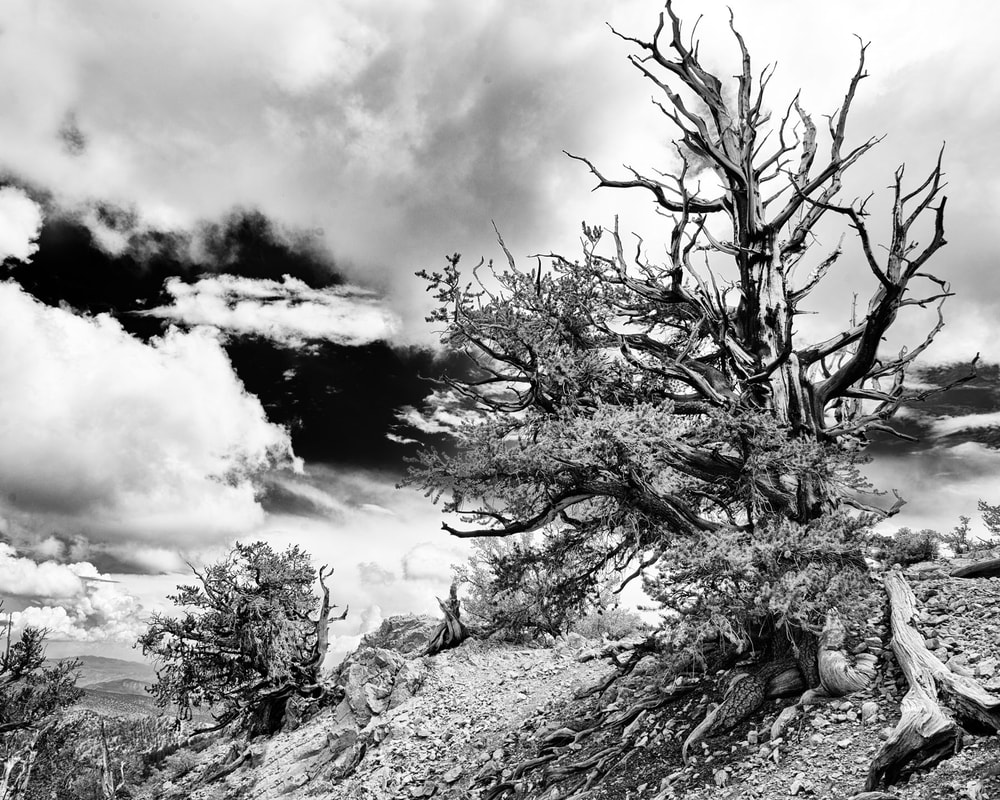 Angry Old One  $279  #SS06
This particular bristlecone pine might be 4,000 years-old. The trees here on the eastern slope of the White Mountains near Big Pine, CA are the oldest living things on Earth. I have often struggled to shoot here because the light is often challenging and the trees are packed together with no good background to be had. But a long walk along the four-mile Methuselah Trail and a sharp eye spotted this old fellow on the edge of a cloud-filled view into Nevada. For once, I had perfect light, lots of contrast and an amazing sky. 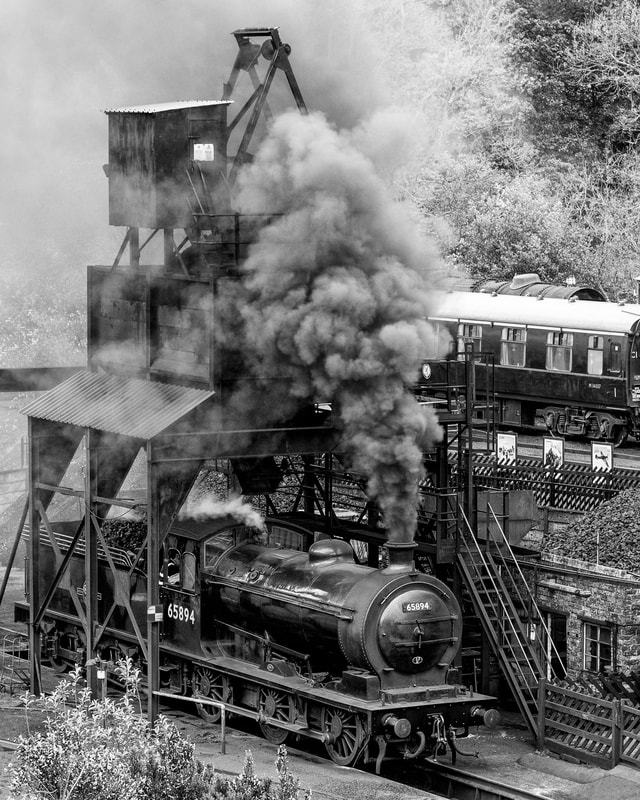 Baby, it’s coaled outside  $179  #SS03
After a three-mile hike from Goathland in North Yorkshire, England through a pleasant wooded valley, my wife and I arrived at the outskirts of Grosmont to discover the shops and coaling tower for the North Yorkshire Moors Railway. Engine No. 894 had just received her load of coal and was about to return to service. Unfortunately, the restricted access to the yard area limited my shooting position and there was no time to find another. So, I shot it with the large bush in the foreground and hoped that some judicious cropping could produce an acceptable image.  Good thing, too. Moments later, chugging and smoking, she smoothly rolled out of the frame. Regardless, for someone raised in the age of diesel, this was a sight from another era rarely seen today. 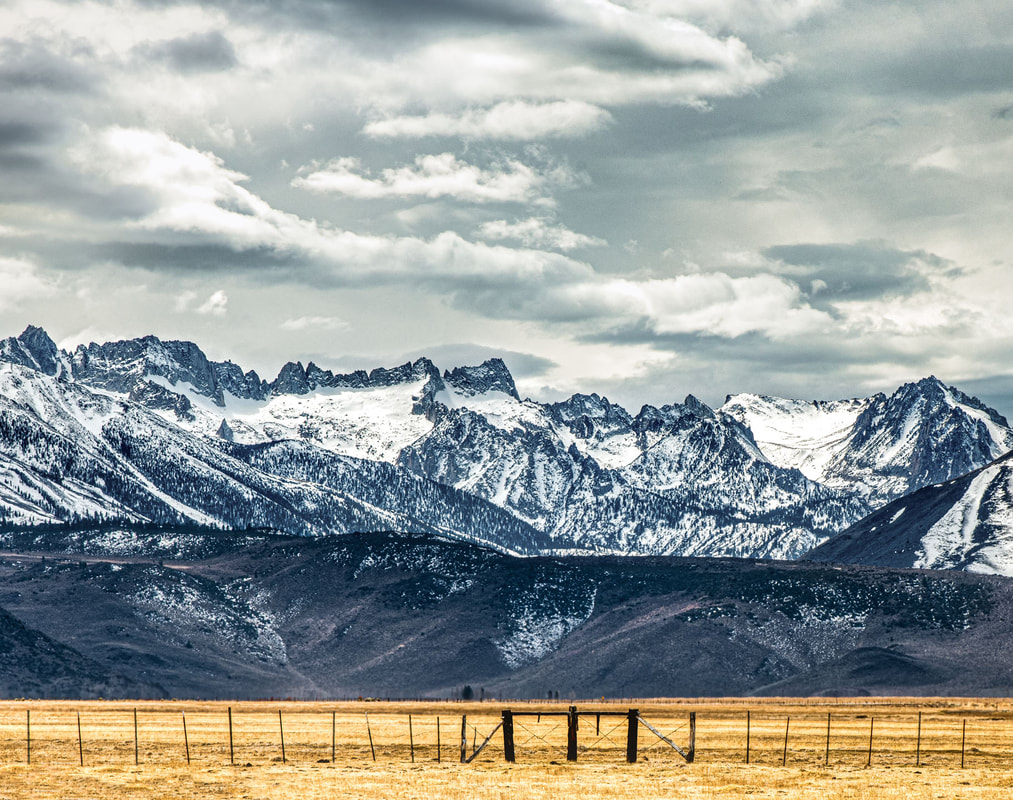 Benny's View  $279  #SS11
Benny Romero is a long-time friend who I met at Hunewill Ranch in 2004. He is a cowboy, a storyteller, an entrepreneur, a historian and great saddle companion. He also owns an event venue, Bridgeport Ranch, where he hosts weddings, anniversaries and parties of all sorts. He basically built the entire facility with his own hands. While telling stories one afternoon with my camera on a tripod and a remote control in my hand, I got this incredible image out his "backdoor" while we talked. 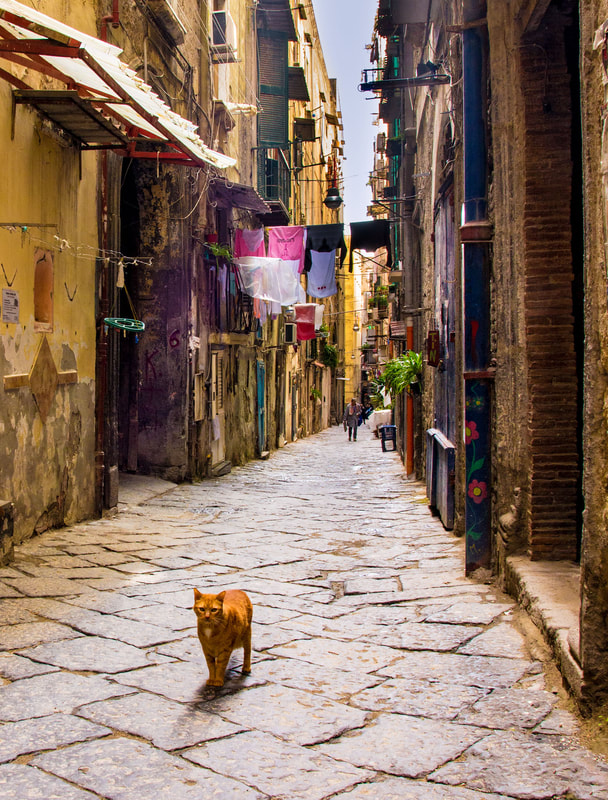 Catwalk  $179  #SS10
Travel photography is about “right now”. Shoot it or miss it. As I passed this alley in Naples, I was struck by the colorful life there. The scene was evocative of post-war Europe with laundry on the line between buildings. Then, the tom cat came out of a doorway and started walking right down the middle of the alley to investigate the stranger in his domain. I caught sight of him and started firing away and got the shot you see here. The lesson, of course, is that being aware of your surroundings can make a good shot a great one. 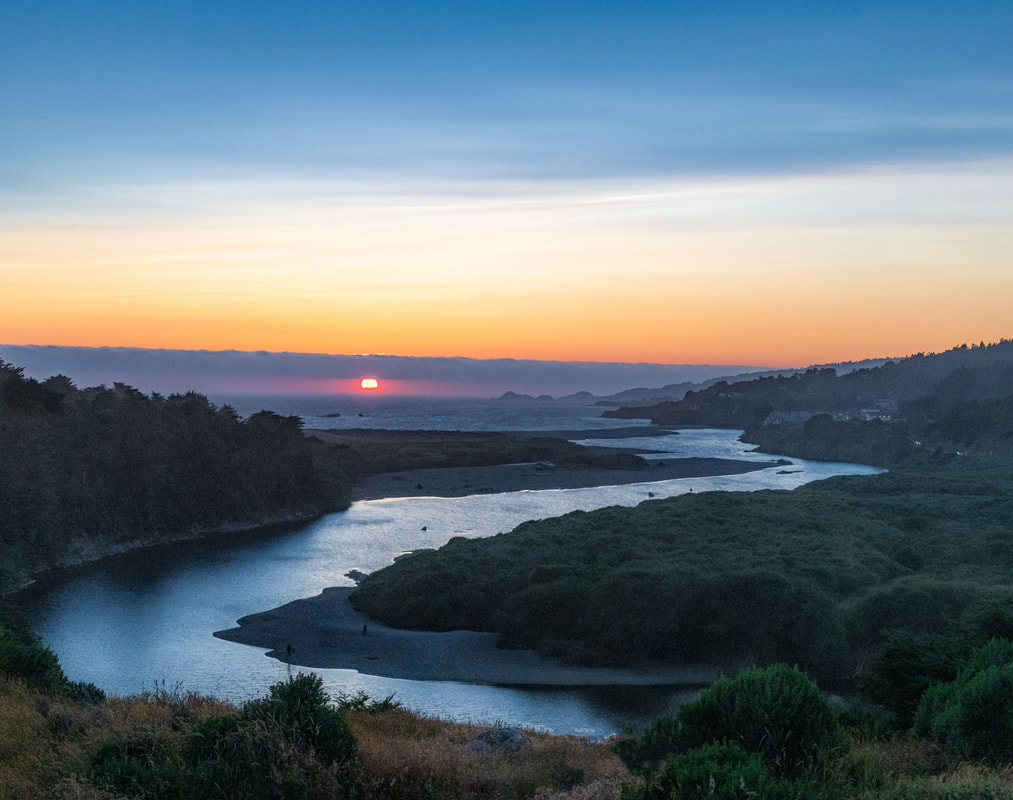 ​Evening comes to the Bar  $279  #SS12
Gualala Point is a spectacular feature of the southern Mendocino Coast with great views; but for various reasons, I hadn’t had the right light, clouds, sun angle, wind and surf to get the shot I wanted despite literally dozens of attempts over a couple of years. One evening with time to kill before dinner with a colleague, I went over to the Gualala Point expecting nothing, saw the potential in this view, set up my tripod on a picnic table and was rewarded with this image just before the park closed. After all those fruitless visits, I got the town, the coast, Highway 1, the Gualala River, the sunset and the tidal bar in the frame. This was the fortunate intersection of happenstance and persistence, which is an important tool in every landscape photographer’s bag. The effort won a Judge's Award at the 2019 Gualala Salon. 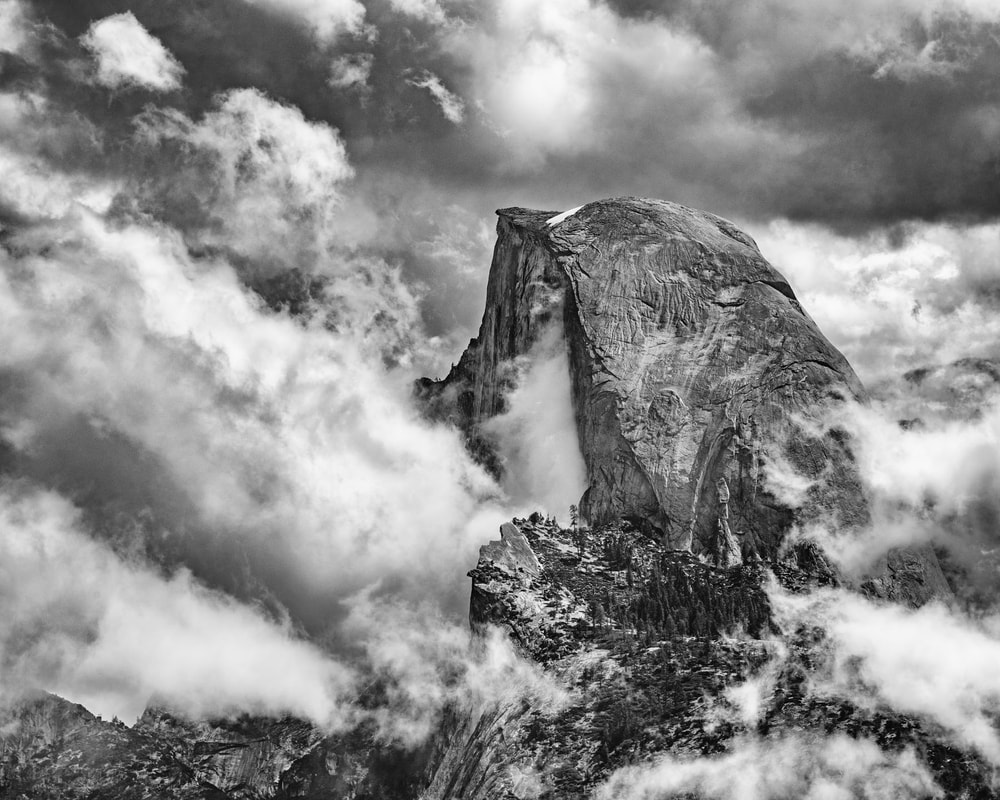 Half Dome Hideaway  $279  #SS01
Visualizing how a shot might look in a dynamic scene is an indispensable tool in a photographer’s bag. While at the Vernal and Nevada Falls overlook at Glacier Point in Yosemite, I noticed fog moving down Illilouette Creek toward Half Dome. Intuitively, I raced over to the main viewing area about a quarter mile away, arrived out of breath and fired off about 30 frames as the clouds enveloped the iconic granite. This was the only image where the face of Half Dome is visible and it looks like the mist is coming right out of the face. As Ansel Adams said, “Sometimes I do get to places just when God's ready to have somebody click the shutter.” 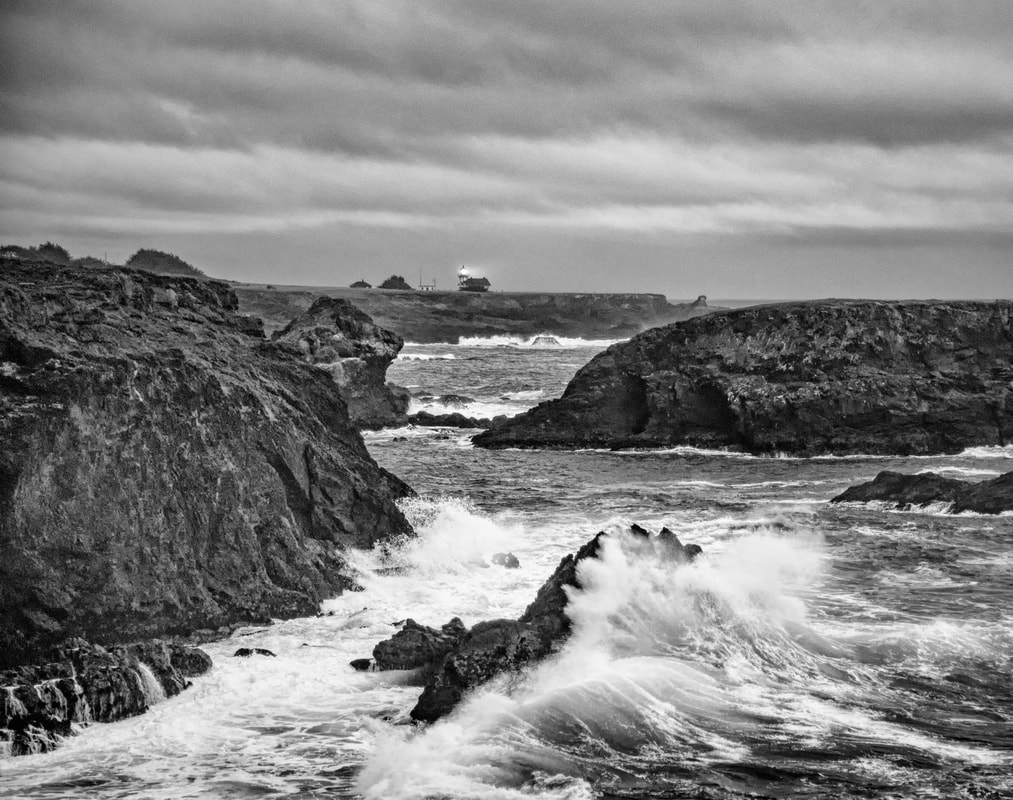 Lightwave  $279  #SS02
In talking to a Mendocino local, I learned there was a view little known view of the Point Cabrillo Lighthouse from the north called Casper Headlands. It is rocky and dangerous but the wave action and cliffs are stunning. I went there at least a dozen times before I got this scene in a long series of shots on a gray and stormy day. Admittedly, synchronizing the light (which is the original rotating Fresnel lens, by the way) with a wave was difficult. So, I helped nature along. The shot is actually two images taken a few minutes apart and then combined together. 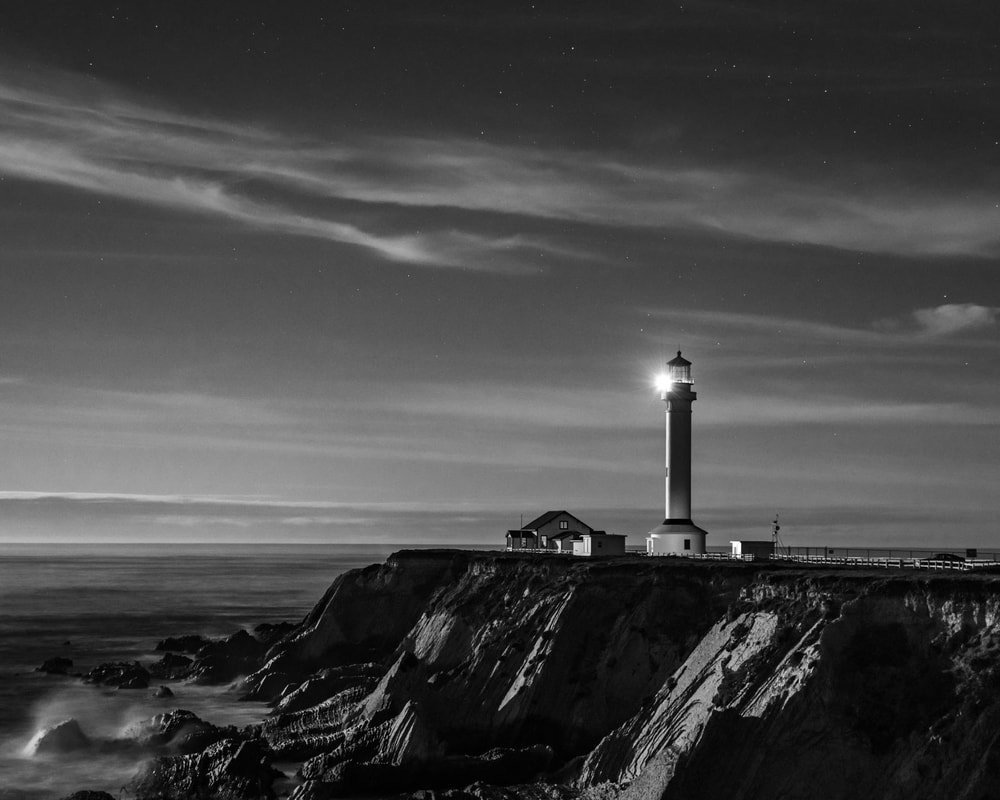 Low Tide Moonset  $279  #SS07
At the suggestion of Mark Hancock, the executive director of the Point Arena Light Keepers, I decided to shoot the full moon on a rare clear evening. The shot was not very successful, so I packed up my equipment and  was about to get in my truck to head home. When I came around to the main gate with the moon about to set, the sun about to rise and low tide at hand, I saw this stunning scene. Out came the tripod again and a few hurried settings later, I got this image. It was not the shot I had in mind but I’ll take it. 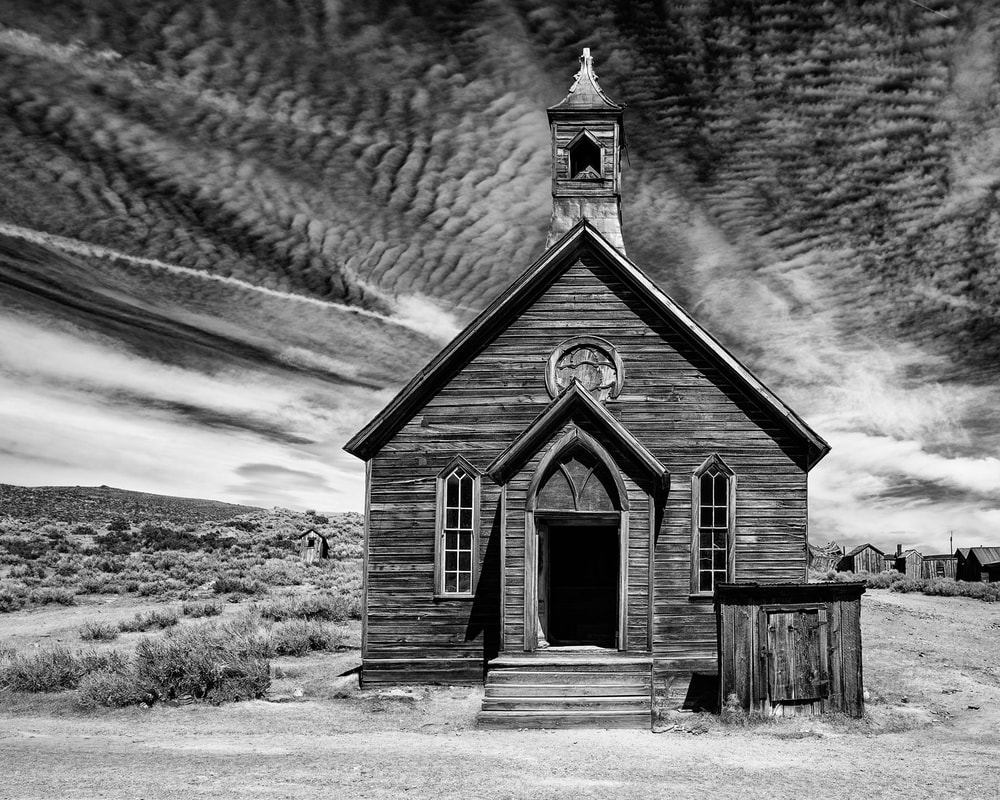 Services Rendered  $179  #SS05
Look up, a fellow pro once told me. If you find a great sky, find something to shoot in front of it. Bodie is the most well-preserved ghost town in the West and there was no shortage of subjects this day. This church, though, had it all: texture, contrast and the mysterious darkened doorway to go with the herringbone clouds. All that was required was a shaded spot for my tripod, a wide enough lens to catch the old outhouse and a few clicks of the shutter. This image was awarded “Best Monochrome Photograph” at Gualala Arts’ annual “Art in the Redwoods” exhibition in 2020. 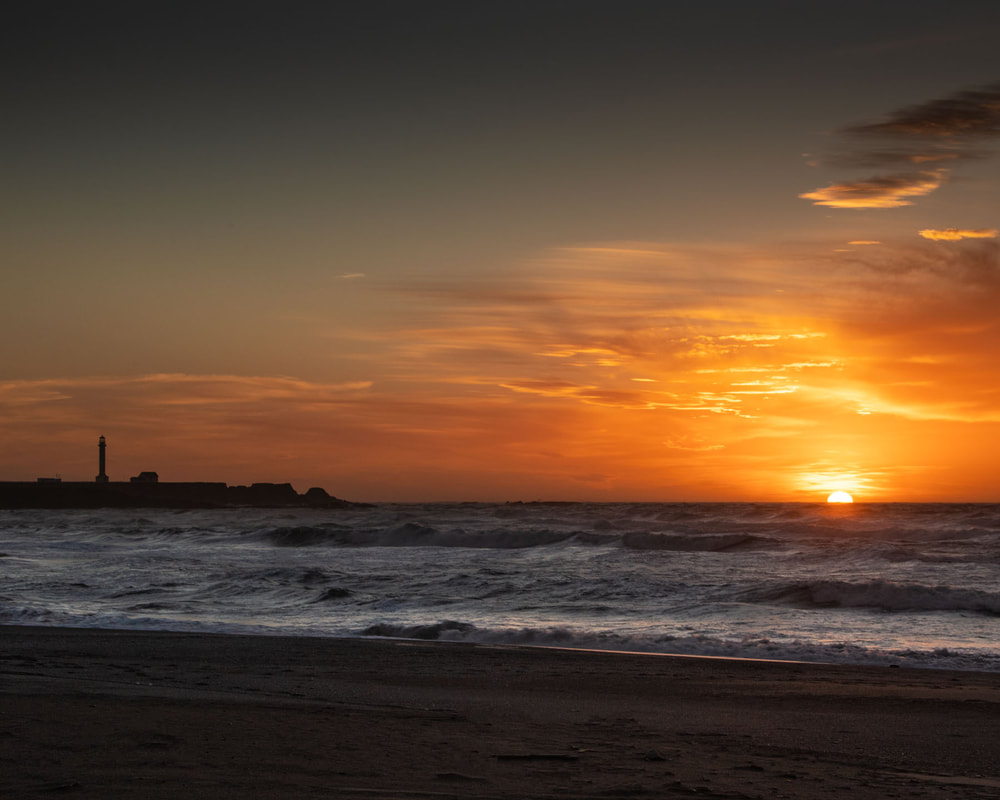 Twilight Afterburner  $279  #SS08
Once in a while, a planned shot goes exactly right. I knew the sun was going to set closely off Point Arena in March and hoped for a rare day with high clouds and a clear horizon. I got it and rushed to Stoneboro Beach in Manchester State Park walking the last ½ mile over sand in 38-degree weather with 20 mph winds. Setting up in an abandoned driftwood fort for shelter, I got the full disk of the sun with Point Area in silhouette and spectacular orange and magenta color. This was one day where luck was the residue of design! 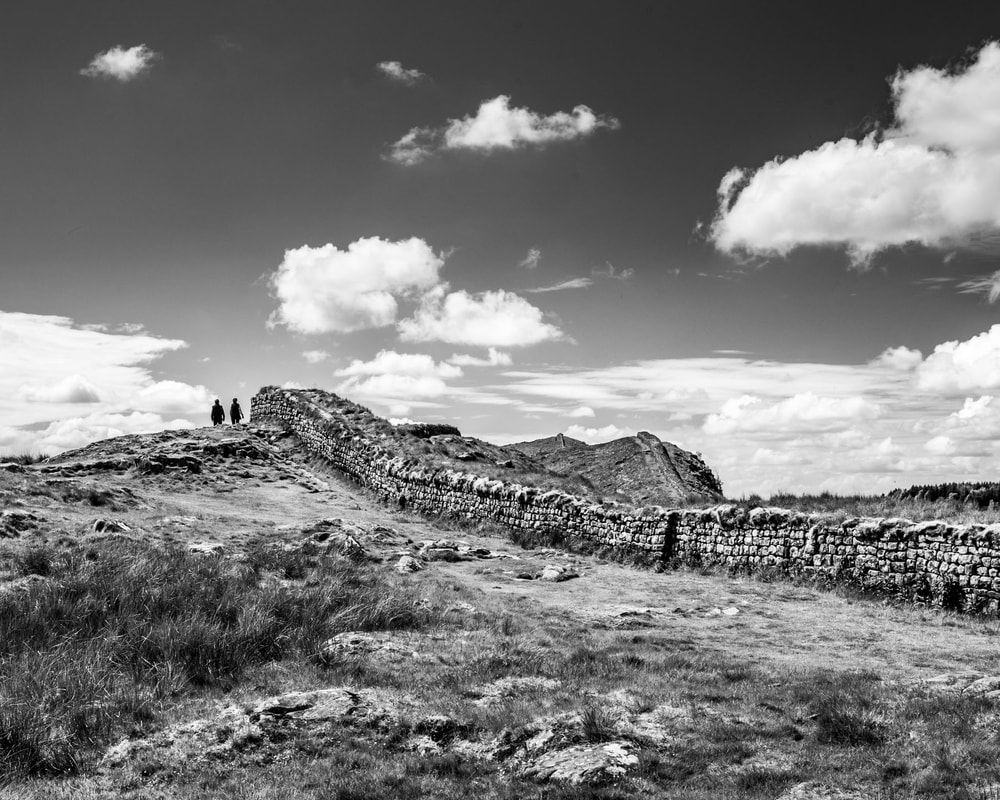 Up against the Wall  $179  #SS04
Hadrian’s Wall, built in 122 AD, runs for 73 miles from coast to coast across the north of England. The wall, which in Roman times was twelve to twenty feet high and buttressed with forts at regular intervals, was raided for stone by the local populace over the centuries resulting in the rather diminished ruin we see today. The adjacent path is a popular trek for the outdoor minded of all ages. I had spectacular weather this day with 50-mile views, cumulus clouds and the wall clearly snaking over the distant hills. I waited till the couple, who had just passed me with a wave, were silhouetted at the top of the hill to complete the scene.
Back to "The Thought behind the Shot" home page