I discovered the Eastern Sierra as an adult and never fail to be stunned by the granite and volcanic grandeur from Lone Pine to Bridgeport. My wife and I have hiked hundreds of miles in these mountains over the years and, after discovering Hunewill Ranch in Bridgeport, we've logged a lot of miles on horseback too. There have been occasional side trips to Bodie, the best preserved ghost town in the West, and to the Ancient Bristlecone Pine Forest in the White Mountains. Of course, we still stay in Yosemite regularly and spend a lot of time in the Tuolumne Meadows/Tioga Pass area in the eastern high country of the park. 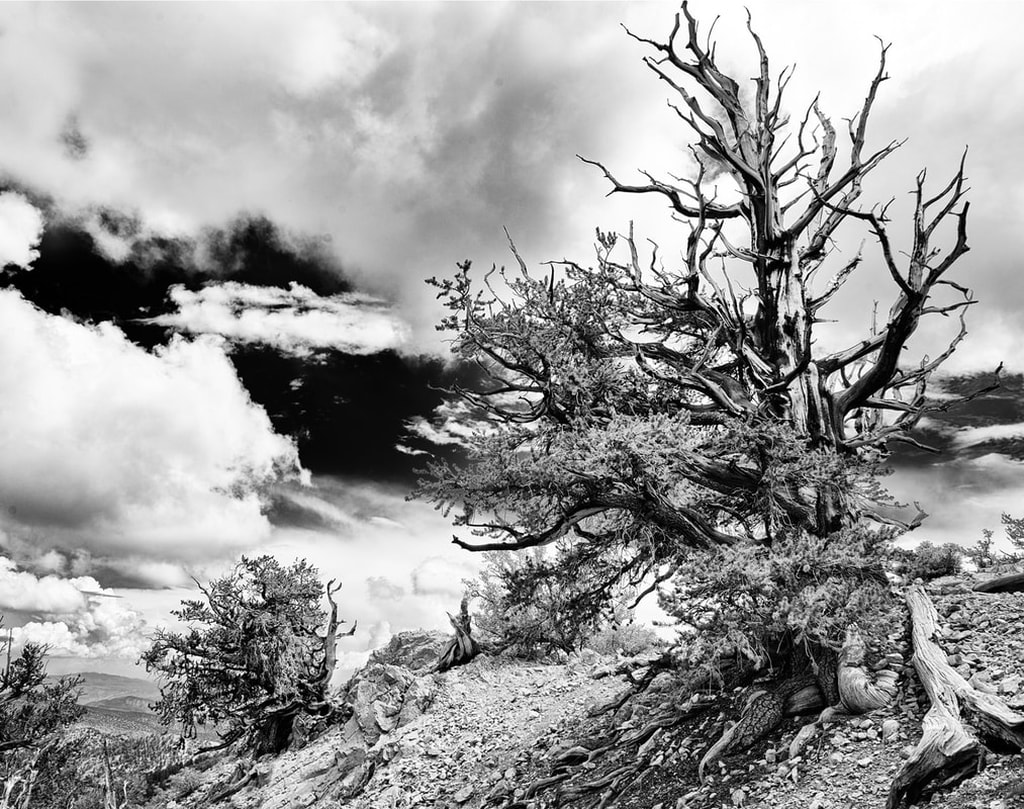 Angry Old One, Bristlecone Pine, Ancient Bristlecone Pine Forest, White Mountains, CA
This particular bristlecone pine might be 4,000 years-old. The trees here on the eastern slope of the White Mountains are the oldest living things on Earth. I have often struggled to shoot here because the light is often challenging and the trees are often packed together with no good background to be had. This tree and that day, however, came with perfect light, lots of contrast,an amazing sky and the Basin and Range country of Nevada in the background.
More Info/Buy 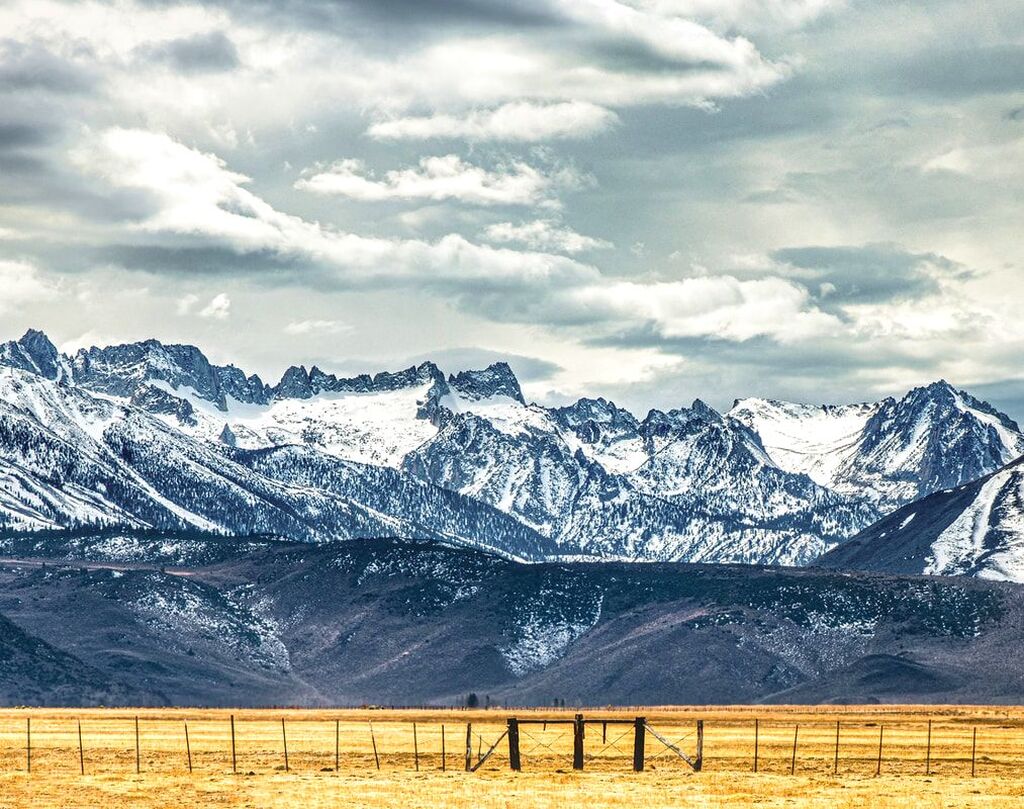 Benny’s View, Sawtooth Ridge, Bridgeport Ranch, Bridgeport, CA
Benny Romero is a long-time friend who we met at Hunewill Ranch in 2004. He is a cowboy, a storyteller, an entrepreneur, a historian and great saddle companion. He also owns an event venue, Bridgeport Ranch, where he does weddings, anniversaries and parties of all sorts. He basically built the entire facility with his own two hands. This is the view he and his guests see looking out his “backdoor”.
More Info/Buy 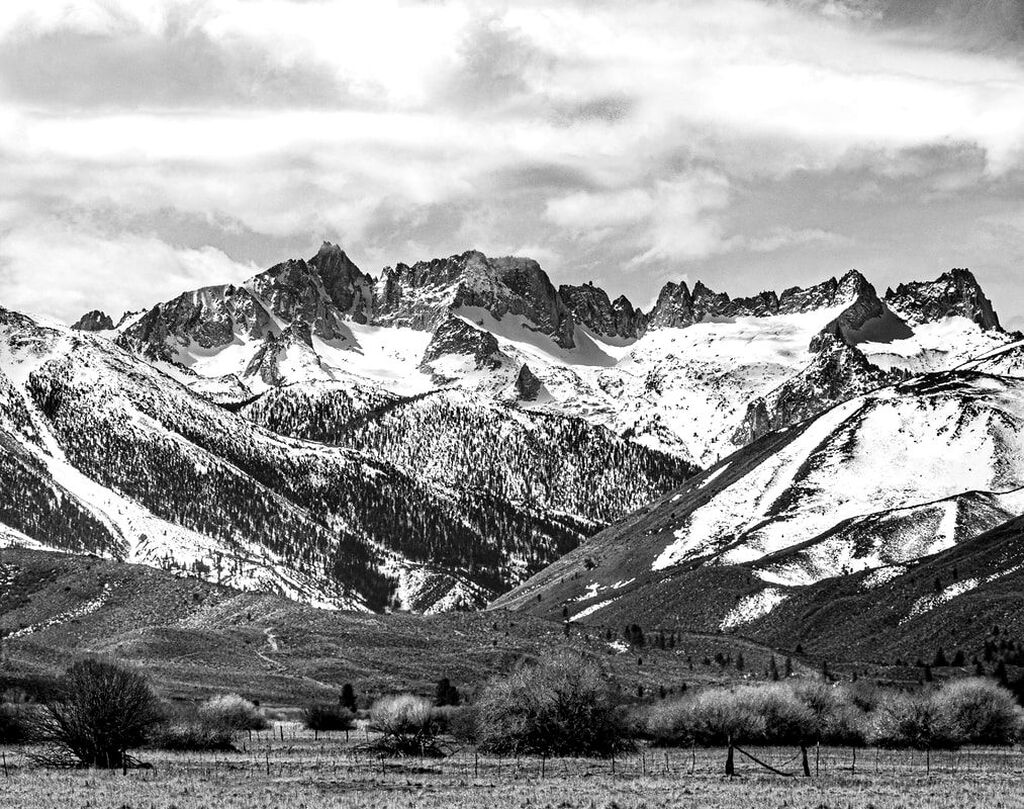 Buzz Saw, Sawtooth Ridge, Highway 395, Bridgeport, CA
Bridgeport is gifted with this massive set of peaks called Sawtooth Ridge or, as they are known locally, “The Crags”, in its backyard. They are actually the Northeast boundary of Yosemite National Park. There is an excellent view of them out on Highway 395 about two miles north of town. This is a fairly scary place to shoot with vehicles roaring by at 75 mph but a tripod and steel nerves got it done.
More Info/Buy 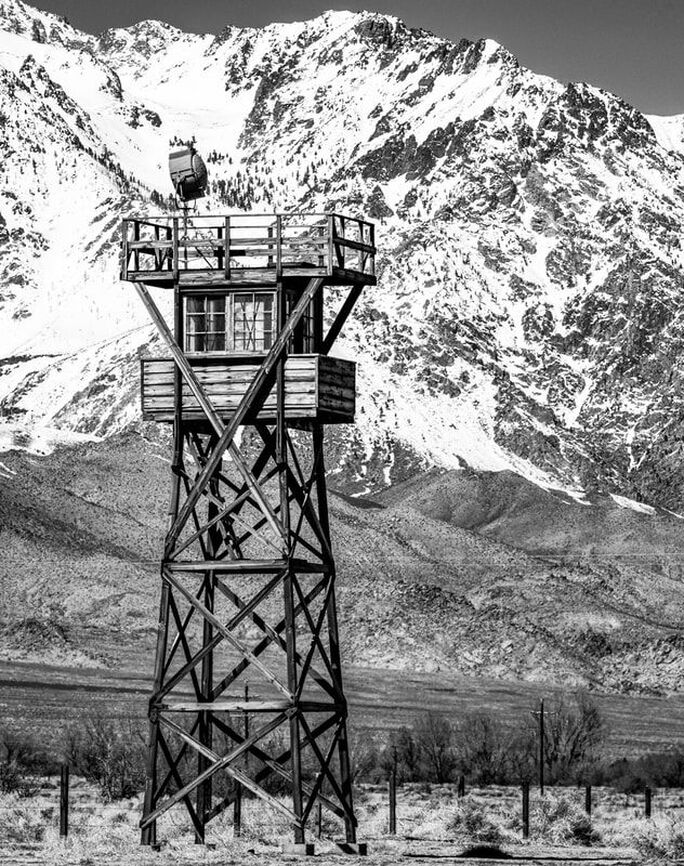 Cold Sorrow, Guard Tower, Manzanar War Relocation Center, Independence, CA
Back in the 70’s when I often skied at Mammoth, I saw a pile of stones that looked like gatehouse along U.S 395 in the Eastern Sierra. A small sign said “Manzanar” and I realized that it was the site where 10,000 Japanese-Americans were imprisoned during WWII. Several years later, this guard tower was built and was followed by replicas of other historic buildings. It became a National Historic Site in 2001. But they built the guard tower first as an important reminder of what happened here.
More Info/Buy 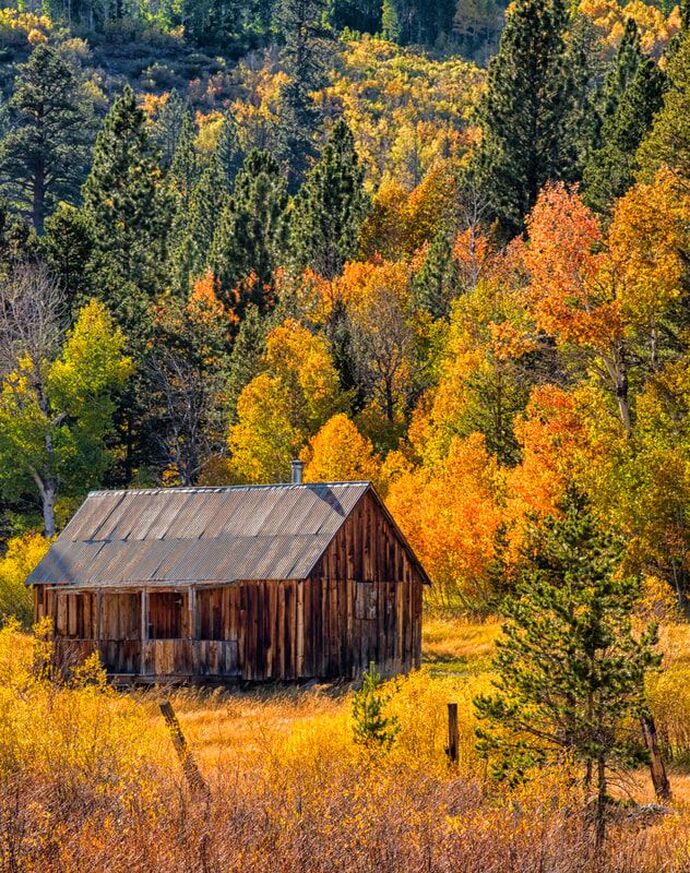 Fall Empty, Abandoned Cabin, Hope Valley, CA
This empty cabin along CA 88 is just east of the Kit Carson Pass south of Lake Tahoe. Most people don’t think of California when they think about fall color but the aspen display in early October up and down the Eastern Sierras is remarkably colorful and worth a long drive to see.
More Info/Buy 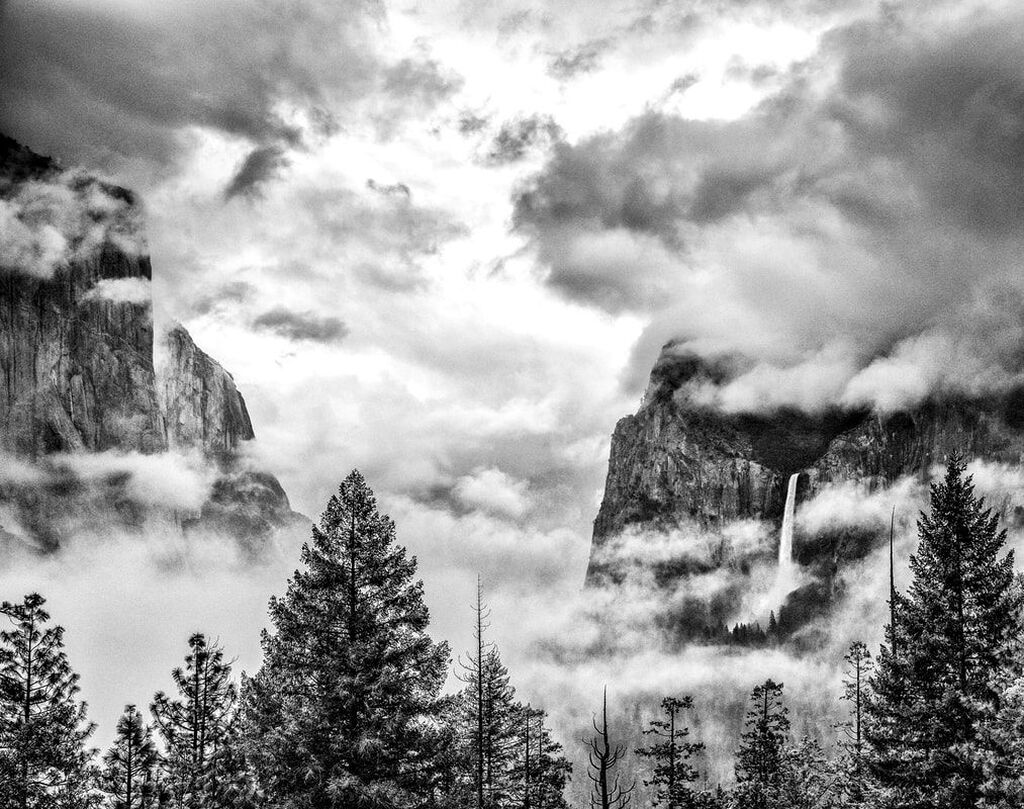 Fog spills over Bridalveil, Bridalveil Falls, Tunnel View Overlook, Yosemite National Park, CA
Yosemite is one of the most photographed locations on the planet. I personally have taken hundreds of photographs from the Tunnel View overlook at the entrance to Yosemite Valley since I was a small child. On this day, the fog was rolling in quickly and the five shots I took there were all I got for the day. Driving down to the valley floor, the fog was complete and it stayed that way for the rest of the afternoon.
More Info/Buy 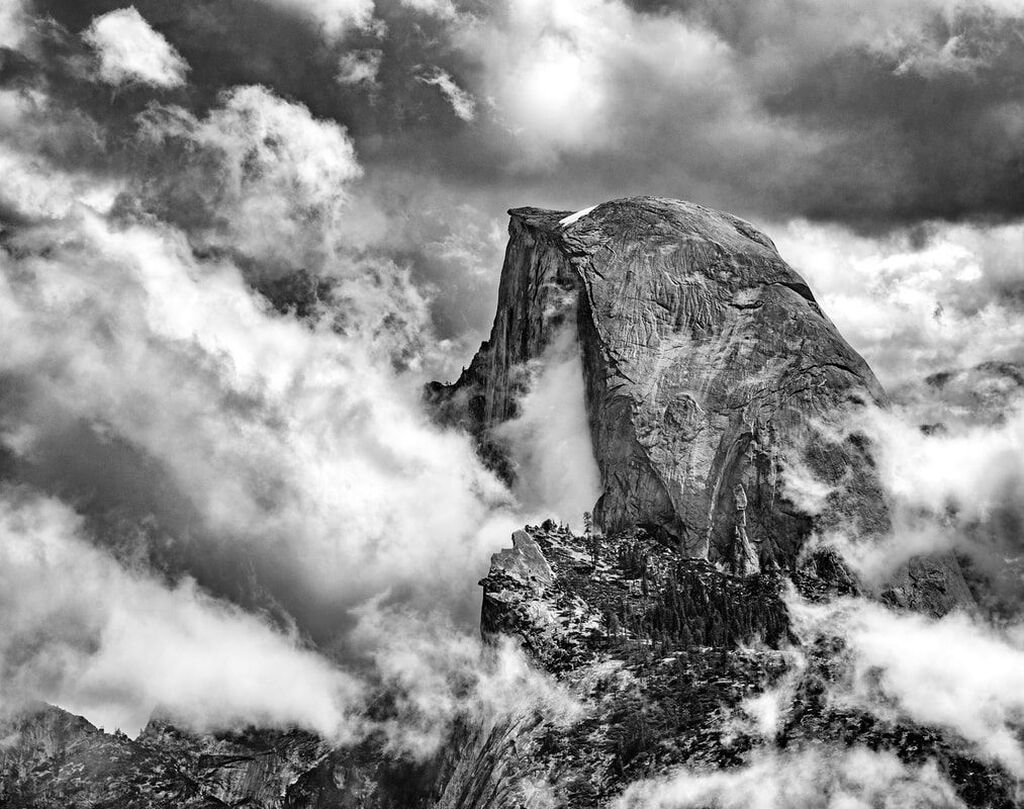 Half Dome Hide Away, Half Dome, Glacier Point Overlook, Yosemite National Park, CA
While at the Vernal and Nevada Falls overlook at Glacier Point in Yosemite, I noticed fog moving down Illilouette Creek toward Half Dome. I raced over to the main viewing area and fired off about 30 frames as the clouds enveloped the iconic granite. This was the only image where the face of Half Dome is visible and it looks like the mist is coming right out of the face. As Ansel Adams said, “Sometimes I do get to places just when God's ready to have somebody click the shutter”.
More Info/Buy 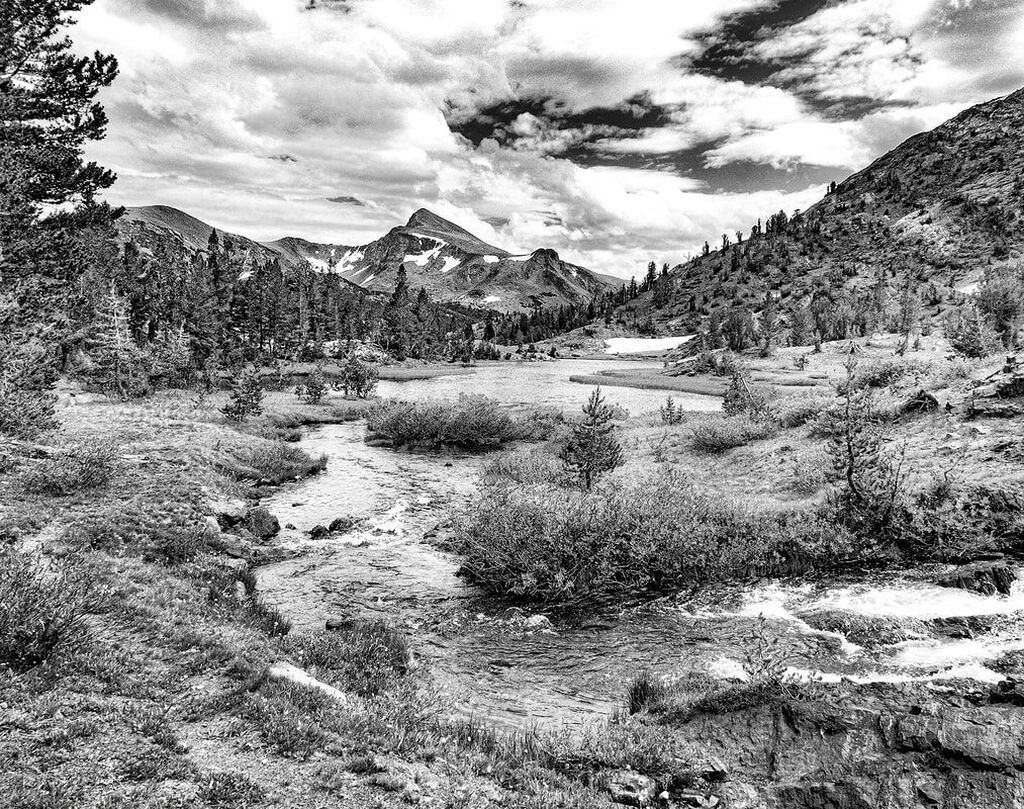 Mined over Matter, Mt. Dana, Mine Creek, Yosemite National Park, CA
At the edge of the Tioga Pass, just before you make the 3,000-foot descent to Mono Lake, there is a trail that leads to the remains of a small mining town, Bennettville. There are several roughhewn buildings left but, for me, the more interesting view was this one of the iconic Mt. Dana, a favorite peak of Ansel Adams.
More Info/Buy 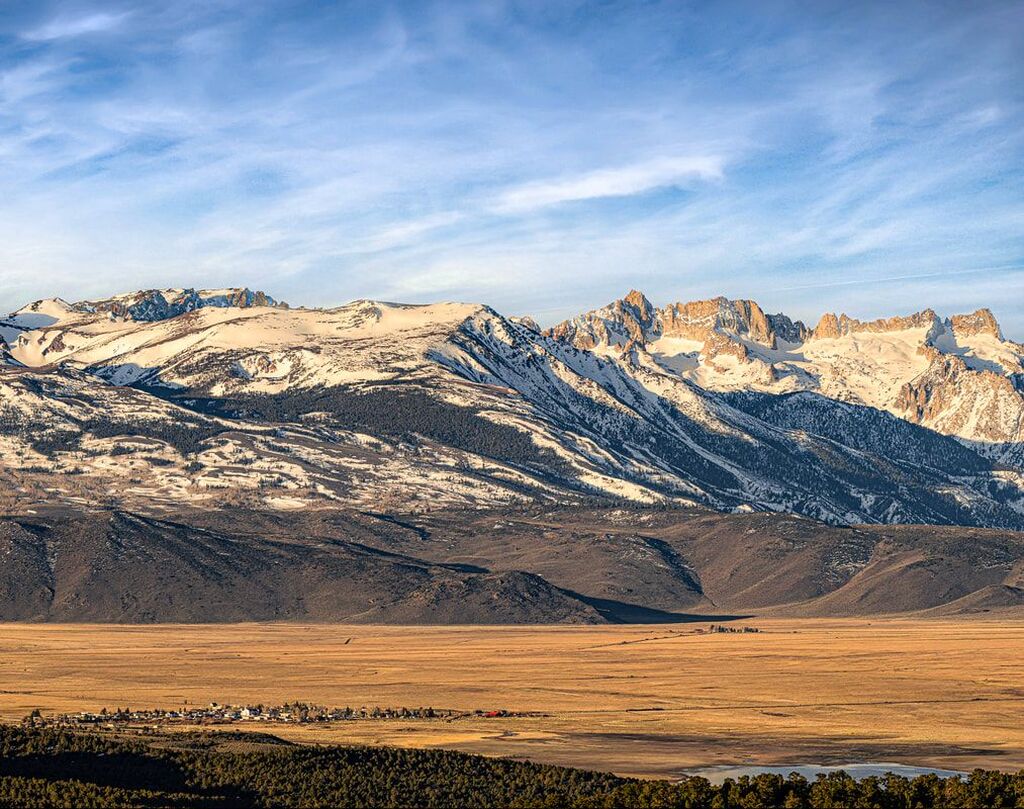 Mountain Loom, Sawtooth Ridge, Bridgeport & Hunewill Ranch, Bodie Hills, CA
After a wild 3-hour adventure in the Bodie Hills, I arrived at this viewpoint of the Bridgeport Valley which could have been found after 15-minute a drive from my hotel. The sheer scale of Sawtooth Ridge and the Valley are on display here. In the mid-ground, the town of Bridgeport and the buildings of Hunewill Ranch (the oldest dude ranch in California) can be seen. Although the popular Twin Lakes are just below the peaks, this is surely one of the most underrated scenic areas in the Eastern Sierra.
More Info/Buy 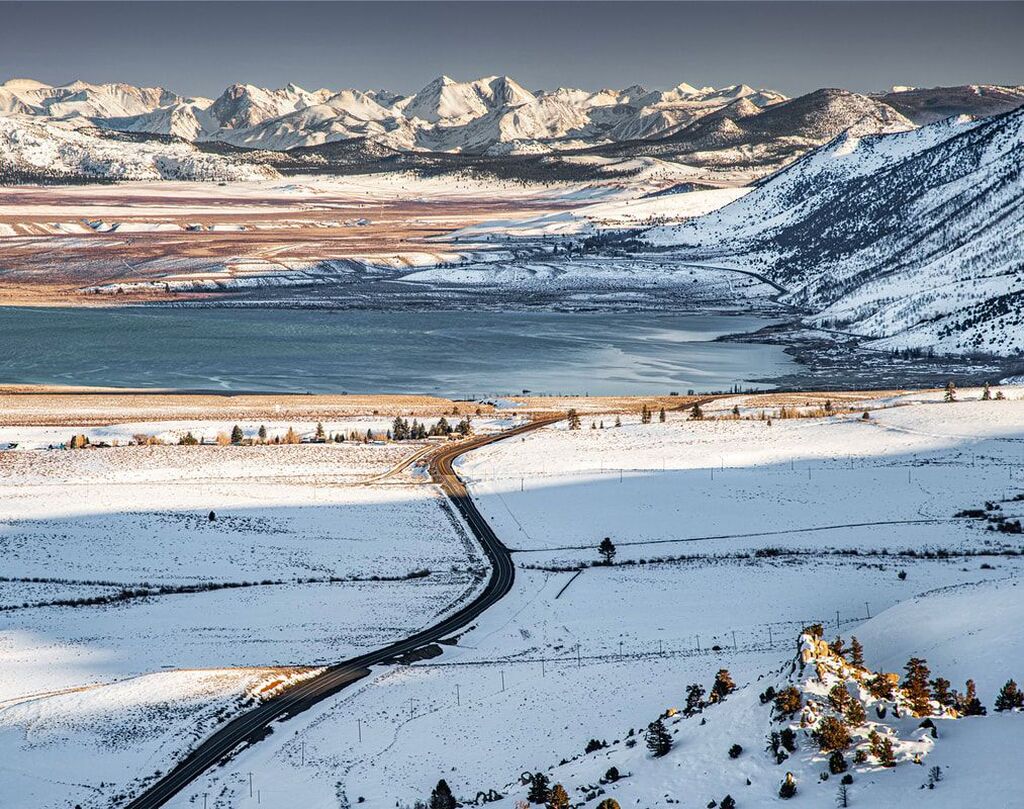 Mono Plain, Mono Lake, Highway 395, Conway Summit, CA
Conway Summit separates the Mono Lake from the Bridgeport Valley. Although I have driven Highway 395 many times, I had never come over this pass in the winter.  On this day, the Sierras around Mammoth were laid out before me dressed in snow, Mono Lake was frozen blue and 395 was a narrow black ribbon disappearing into the white behind Lee Vining. Stunning.
More Info/Buy 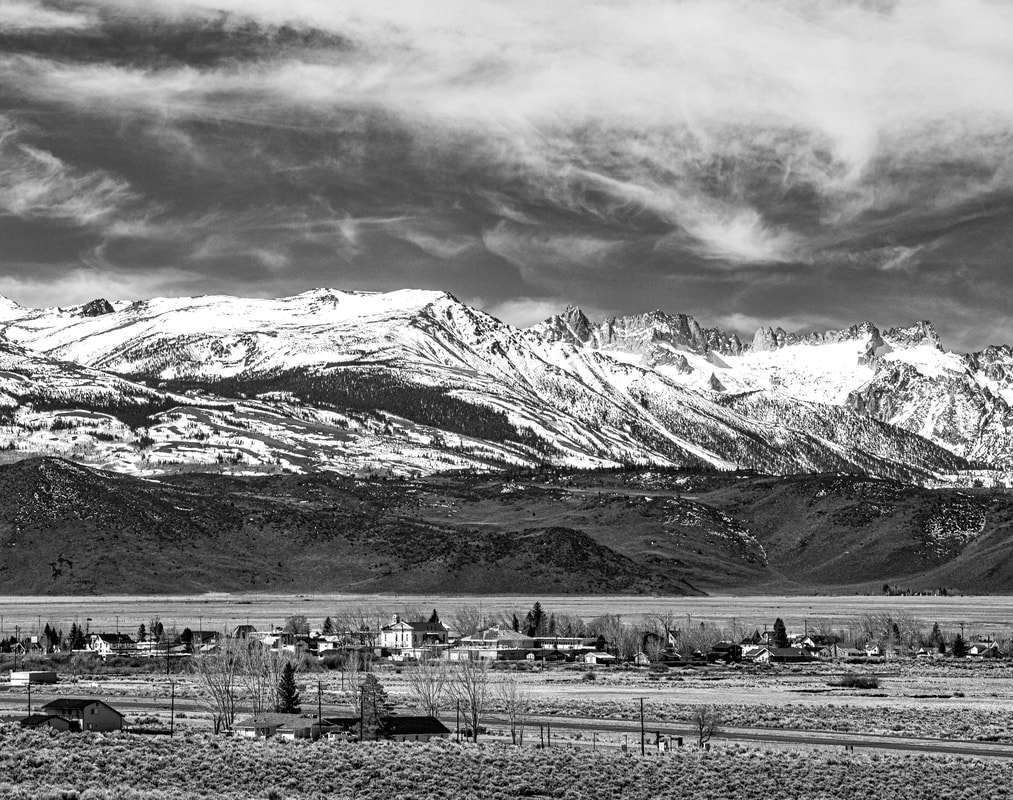 Peak Performance, Sawtooth Ridge & Bridgeport, Bridgeport, CA
Several locals in Bridgeport asked me if I could find an overview of the town. Most of the time, the courthouse is the only image that represents the community. I found this view at the waste/recycle facility on the north edge of town and shot it between truckloads of debris making its way to its final destination on a Sunday morning.
More Info/Buy 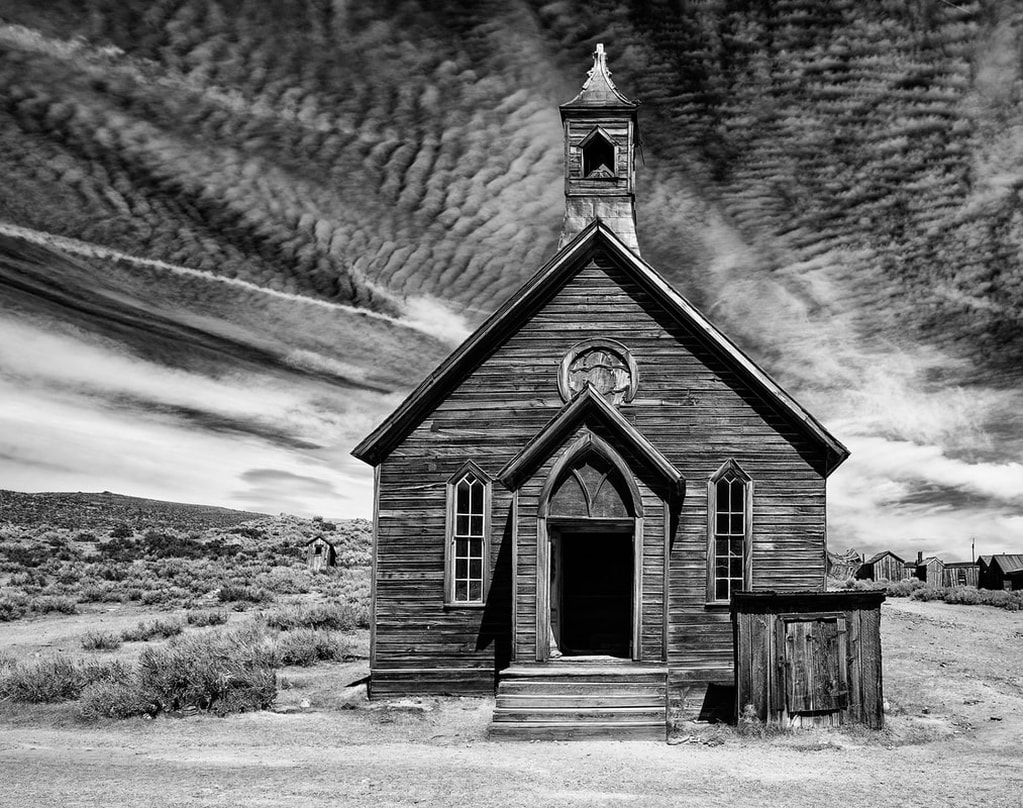 Services Rendered, Methodist Church, Bodie State Historic Park, Bodie, CA
Bodie is the most well-preserved ghost town in the West. It once had a population of 8,000 people but like many boomtowns, it had its day and then declined. Now a state historic park, it is often the coldest place in the United States due to its location and altitude. This Bodie church, still active, is widely photographed but not with this kind of sky. Services are still held here. This image was awarded “Best Monochrome Photograph” at Gualala Arts annual “Art in the Redwoods” exhibition in 2020.
More Info/Buy 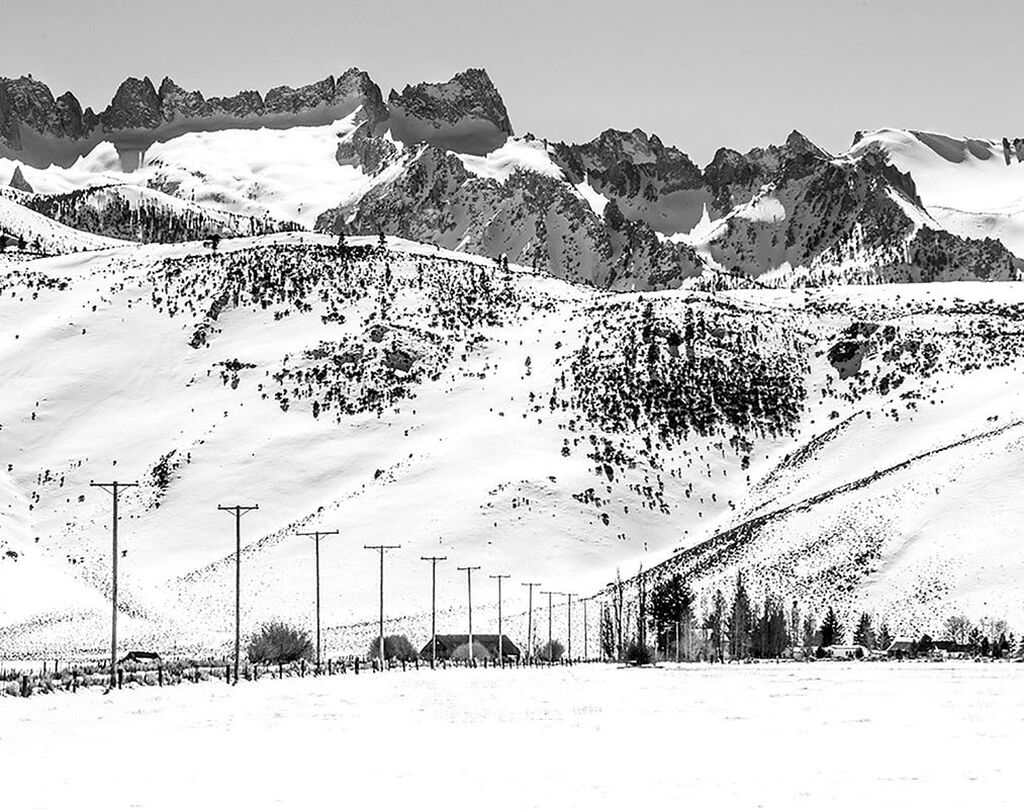 White & Light, Hunewill Ranch, Bridgeport, CA
Hunewill Ranch is one of the oldest working ranches in California founded in 1862. Much of the timber for Bodie came from here. It has been a cattle operation since 1878 and a guest ranch since 1935. The fifth generation of Hunewills still wrangles both cattle and guests. The ridge behind the Ranch is known locally as “The Crags” and it is the northeast boundary of Yosemite National Park.
More Info/Buy